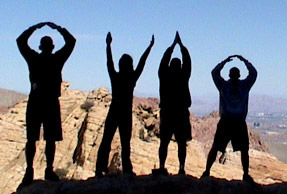 This summer the livestock agriculture world was abuzz with the news that the Humane Society of the United States had decided to cut a compromise with Ohio’s farming groups and (then) governor Ted Strickland. HSUS agreed to bail on its planned anti-farming ballot initiative, at least for this year. The farmers agreed to set some non-binding targets for Ohio's Livestock Care Standards Board. Strickland agreed to whatever HSUS asked of him, in an ultimately futile effort to save his Governorship.

That deal is up in the air now, however, since John Kasich defeated Strickland in the state-wide election two weeks ago. Strickland was HSUS’s Buckeye buddy. Kasich, on the other hand, may scrap the whole thing. If he goes that route, he's going to need a catchy slogan to explain the appointment of his new Agriculture Department director, Jim Zehringer (more on him below). Everybody needs a slogan, right?

We'd like to help. Here are the first drafts:

Sure, these won't work at football games. But they just might be good on the farm.

Back to Jim Zehringer, the state legislator who Kasich appointed as the state director of agriculture yesterday. Zehringer is no shrinking violet when it comes to defending farmers from the animal rights movement:

Zehringer explained many people in favor of HSUS are vegans and would like to see the country go to a vegan society.

HSUS gains support by showing emotionally-charged videos of animals being abused or neglected. People who want animals to be treated well willingly give financially.

What HSUS fails to mention is that less than two percent of their budget goes to saving animals, according to Zehringer.

“The other money goes to promoting their agenda, and their agenda is not saving animals,” said Zehringer. He is a farmer in Mercer County and member of the agriculture and natural resources committee at the state house.

This is bad news for HSUS, good news for Ohio’s farmers, and better news from Ohio's farm animals. (Vegans, remember, have no use for them whatsoever.)

Zehringer clearly doesn’t have any reservations about telling it like it is. If Governor-elect Kasich is planning on scrapping his predecessor’s “Buckeye Compromise,” he certainly appears to be equipping himself for a knock-down, drag-out fight with a certain group of chicken-hugging carbetbaggers from Washington, DC.

This could be fun.