We Dogged Wayne Pacelle in the Big Apple - HumaneWatch 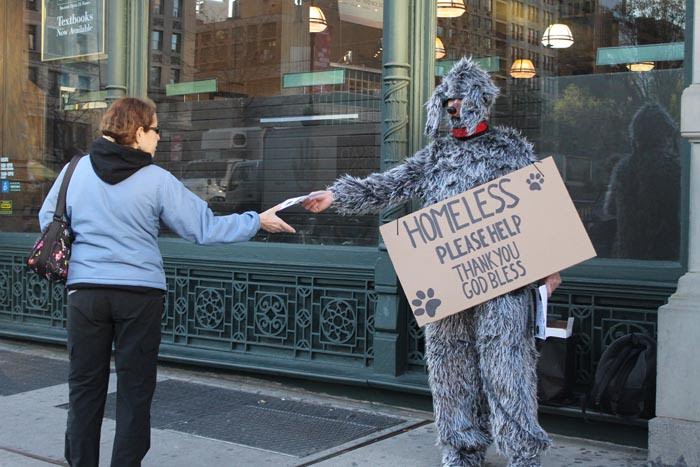 Humane Society of the United States CEO Wayne Pacelle is busy traveling the country promoting his new book, The Humane Economy, though a more honest title would be “The Vegan Economy.”  But who are we kidding? HSUS has never been about honesty whether it’s how many pet shelters it has (zero) or its agenda (ban animal use).

Wayne had a book event on Wednesday in New York at a Barnes & Noble. And since HSUS has a serious history of hiding things, we did what any good watchdog organization would’ve done—we sent a guy in a dog costume to hand out information about Wayne.

The costume combats the misperception that HSUS helps local animal shelters.  It highlights that while Wayne self-promotes, homeless cats and dogs remain deep in need. And since HSUS receives $125 million annually in donations, but gives only 1% of it to local shelters, it’s on us to raise awareness of HSUS deceptions and suggest that donors give local instead.

The flyers elicited a mix of reactions. Some pedestrians politely accepted the flyer and learned a few things about HSUS. Others crumpled it up and threw it in his face.  A few kind souls thought he was an actual homeless man-dog, and offered money. (We suggested giving to a local pet shelter instead.)  The most interesting, however, was a woman who took a flyer as she stepped inside only to burst back out within seconds, returning her flyer and calling our dog a “liar” with “wrong information.”

Guess she got a chance to talk to Wayne and his handlers, who obviously weren’t happy to have an opposing voice present.

Being a watchdog can be a thankless job (just ask our protest pup). But when an institution like HSUS can basically brainwash its supporters, it’s a strong call to continue keeping a watchful eye out.