What&apos;s an Animal Care Expo without Any Animal Care? - HumaneWatch

Once each year the Humane Society of the United States holds an Animal Care Expo at a fancy resort—what it calls “the premier educational and networking conference for animal care professionals and volunteers.” The 2011 event took place last week in Florida, at Disney’s Coronado Spring Resort.

The exhibit booths and educational workshops comprise (unfortunately) one of the very few ways that HSUS interacts with hands-on pet shelters, but it’s a start. 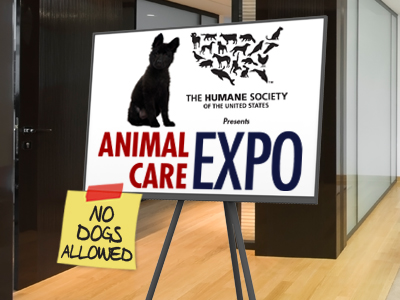 Still, it’s aggravating to know that the Expo is a money-making enterprise for the already-wealthy HSUS. Some of the event’s promised seminar topics seem tailor-made for HSUS revenue generation. For instance:

You get the idea. Admission to the conference can cost up to $250. HSUS cleared more than $222,000 in profits from its 2009 Animal Care Expo. And last week’s event included everything from a Wayne Pacelle book signing to a lecture on “Female Leadership in Animal Protection.” (The title? “Queen Bees.”) About the only thing it lacked was … well, actual animals.

HSUS’s chosen Disney resort allows only seeing-eye dogs and other service animals. “All other animals must be boarded.” And although convention-goers could listen to a lecture about “executing wildly successful mega-adoption events,” no one was actually demonstrating one.

It doesn’t have to be this way. One competing Pet Expo held a few weeks earlier—3,500 miles away—just might be a better model.

That’s 7,000 more than all of HSUS’s trade shows combined.

This is a great example of the difference between people who roll up their sleeves and political organizations (like HSUS) that limit themselves to a birds-eye view of animal issues.

HSUS talks the talk, but that’s where it seems to end. It’s not just the millions of dollars Wayne Pacelle and company have sunk into their own pension plan. (All that money could be helping pets in shelters at this very moment.) But it’s also the millions it pumps into politics and lobbying every year.

The Disney-dominated region of Florida has dozens of needy pet shelters. Pacelle calls HSUS “the nation’s leading advocate for animal shelters,” but while he puts his hand out, shelters in Orlando are still waiting for their hand up.

Better yet, can’t HSUS—with its $192 million in assets—put on this event for free? Or donate all the proceeds to pet shelters? It just might help the group push its shelter-grant total above one percent of its overall budget.

So why doesn’t HSUS demonstrate some actual “animal care” at next year’s expo. Given the organization’s record, there’s basically nowhere to go but up.