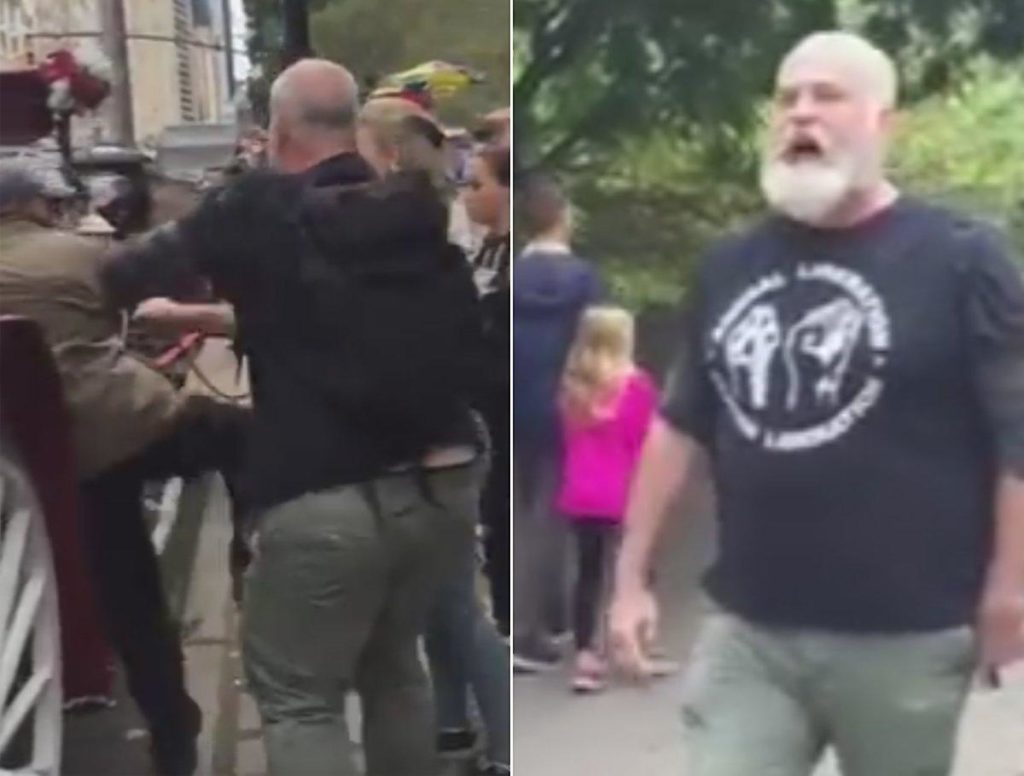 Civil discourse begins to crumble when people who do not see eye-to-eye cease to civilly communicate with each other and resort to acts of aggression (see current Presidential election!). This notion was on full display last week, when several animal rights activists harassed families seeking one of the quintessential experiences in New York City: riding a horse-drawn carriage through Central Park.

Leading this animal rights goon squad was Eddie Sullivan, a bulky activist who, like The Hulk, you apparently wouldn’t like when he’s angry. Sullivan, along with several other activists, have reportedly badgered and insulted tourists as they try to board the carriages, shouting insults like “typical f***ing ***hole tourists” in front of families with young children, as well as threatening to “make sure people won’t get into the carriage.”

But things went further than just the typical verbal intimidation, as Mr. Sullivan is seen on video approaching one of the carriage drivers, yelling at him and then proceeding to shove him hard into the carriage knocking the 55-year-old man off balance and causing one woman to yell “I have a baby, do you mind.” Sullivan was later charged with misdemeanor assault.

But families in New York City have not been the only victims of this verbal intimidation from animal rights groups.

Another example of this verbal intimidation is the case of a young Spanish boy with cancer, who endured the hateful scorn of animal rights activists last week after he attended a charity bullfight. Currently undergoing chemotherapy and battling every day to fight his cancer, the young boy came home to a barrage of insults flung his way on social media, with one person even telling him to “just die already.”

The rise of this venomous discourse by animal rights activists seems to be more than just rare vitriolic rhetoric uttered by a few bad actors, but more of a cultivated culture of protesting.

Recently animal rights groups met for the Animal Rights National Conference in Los Angeles. This conference featured a significant list of speakers including a number of HSUS staffers such as Paul Shapiro (Vice President), as well as members of the Humane League and SHAC.

At this conference, several activists began to set the framework for how to get their message out, utilizing more drastic methods.

With suggestions that would make famous radical organizer Saul Alinsky proud, one by one speakers at the conference began to advocate radical methods to shutting down opposition.

Coman-Hidy of The Humane League advocated, “When it is time to launch the campaign, find a vulnerable target, prepare everything for at least a few weeks and then assemble an overwhelming force to utilize from day one. The crueler it is, the quicker the fight is over.”

These suggestions proved to be great crowd-pleasers and seemed to really strike a chord with many of the attendees. But for organizations in attendance, like HSUS who have suggested that they are “seeking a humane world” for animals and humans, it is truly troubling to see them rub elbows with those who paint a dangerous future for civil discourse.

Ultimately, many of the campaigns run by HSUS, PETA, and other activists tar other people with labels as animal abusers. In some specific circumstances it’s appropriate, such as for the uncovering of a dogfighting ring. But in other circumstances it isn’t, and a broad brush is used to, for example, claim that farmers broadly abuse animals, even when the facts don’t back that up. This kind of rhetoric is not only toxic, but it is incendiary. Is it any surprise that some people hear inflammatory rhetoric and react with such a venomous attitude towards others?

With a continued insistence on shutting down the opposition by aggressive means, it’s not shocking when animal rights activists take a more radical approach to those they disagree with.