Have you seen today's HSUS fundraising diatribe from Wayne Pacelle? The one personally attacking us? (Yes, we're on that mailing list.)

We started counting the lies, but quickly ran out of fingers. And toes.

What do you think? Is this a sign that Wayne is feeling pressure? That he mistakenly ate a piece of animal protein and now his brain's all goop? That he's sensing the walls closing in around him after this effort has been going for just three days?

Funny. We didn't think he was that insecure.

Or maybe HSUS really is 100 percent about raking in the dollars, and Wayne will do whatever it takes. Even putting his organization at risk for a libel lawsuit.

They certainly have enough attorneys over there. You'd think at least one of them would have piped up before the fundraisers hit the "send" button.

Oh … and we just happened to have this celebrity snapshot lying around. Enjoy. 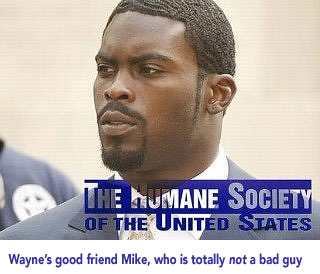