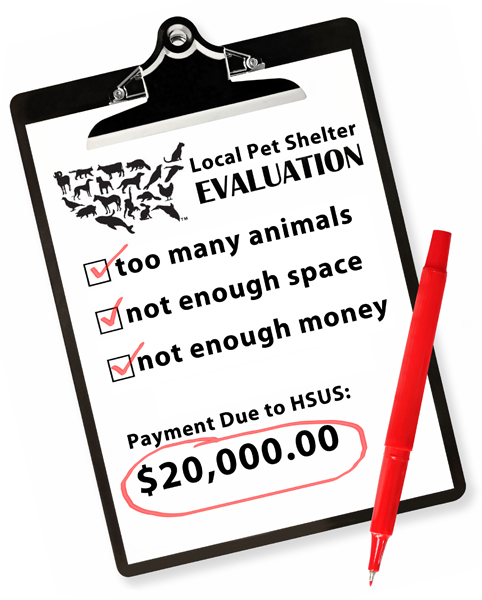 We noticed a news story recently that HSUS had charged a Virginia shelter $15,000 a few years back for an evaluation. It’s not the only time, and it’s kind of kicking shelters when they’re down: HSUS already deceptively raises money as if it’s a sheltering group, yet donates just 1 percent of the money it raises to shelters. And HSUS also charges shelters for evaluations.

Here’s what really bothers us: HSUS has $200 million in assets. It has $32 million in hedge funds alone. Couldn’t it sell off a few shares of stock and perform this kind of service for free? How many animals would still be alive if these shelters had the extra $15,000 or $25,000 for animal care?

Apparently not. In fact, HSUS announced that it’s doing a “tour” of shelters in South Dakota this week. From a group that puts out several hundred press releases a year, this is just more spin designed to give it PR “cover.” While HSUS claims to provide services for shelters, it often comes at a cost: Humane Society University charges over $1,000 for classes, and HSUS’s Animal Care Expo costs $250 for registration.

We went digging around to see how common this is. We already knew of one or two examples. But the list is a bit longer:

There were also about 20 other shelters that we found in the past 10 years that had an evaluation done by HSUS. We’re not sure how much they paid HSUS, in part because a shelter evaluation isn’t a separate line item on the organizations’ tax returns (like a simple grant would be).

Assuming the average group was charged $20,000 for an evaluation, that cost could be a significant chunk of its operating costs. The Danville Humane Society’s budget was $251,000 in 2004 when it got the evaluation. For government-funded shelters, it’s the taxpayers who foot HSUS’s bill.

It’s interesting to see that the HSUS team audited the Norfolk, Va. animal shelter. We wonder what HSUS would make of another shelter in Norfolk: PETA’s. According to filings with the Commonwealth of Virginia, PETA kills 95 percent of the dogs and cats in its care at its shelter.

But considering that the head of HSUS’s shelter consultation program said, “When I euthanize an animal, I don't believe I am killing it,” we’re guessing PETA might not get any points deducted in that regard. In fact, one North Carolina shelter decreased its holding time for healthy animals before euthanasia upon recommendation from HSUS.

And are the HSUS evaluations worth much, anyway? Not in the experience of one Wisconsin shelter’s vice president:

The Humane Society of the U.S. report is garbage. The report is full of errors. They only talked with us for two hours. The report is based upon money, nothing about animal care.

HSUS? Based upon money? Imagine that.