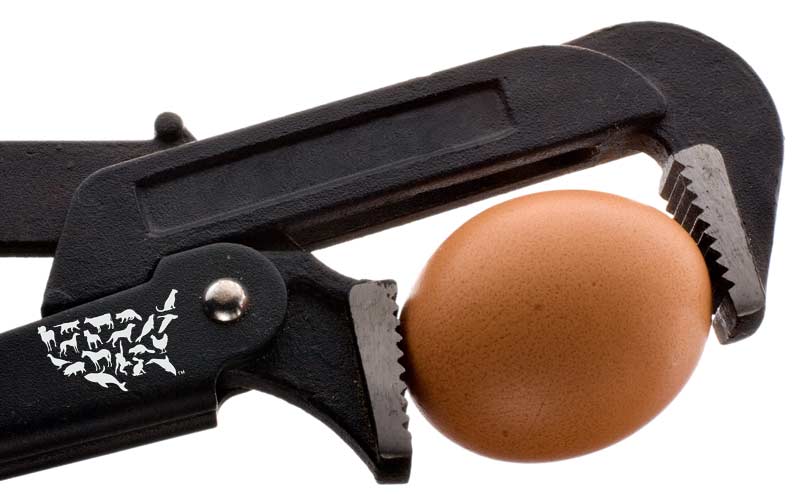 During the 2008 “Proposition 2” campaign in California, the Humane Society of the United States alleged that it had uncovered a “price fixing” scheme by egg farmers’ largest trade association. HSUS sued the trade group, and pressured the federal government to investigate. Now grocers are jumping on the bandwagon. WDAF-TV4 in Kansas City, Missouri reports (emphasis added):

Grocers claim the effort was coordinated through egg industry trade groups, which disguised the effort as an animal welfare program. The program required egg producers to eliminate hens by limiting the number of birds in each cage.

In other words, the egg industry is getting hammered for creating an animal welfare program that asked farmers to give hens more space to live in … which is exactly what HSUS wants?

What the heck is going on?

HSUS has been telling farmers to give hens more space for years. In fact, that’s really the only thing Proposition 2 was about. The measures related to veal and sows were largely window-dressing.

And HSUS now demands that California egg farmers go “cage-free,” giving hens at least 216 square inches of space. Proposition 2 only requires that hens must have enough space to engage in certain movements. One California producer created a new “enriched” cage with more space than a conventional cage, but HSUS won’t accept it.

When you think about it, Proposition 2 itself was a price-raising scheme. HSUS, by trying to force California farmers to go cage-free, would impose new capital, feed, and labor costs on them—expenses that in turn get passed on to consumers. Researchers at the University of California-Davis reported in July 2008 that eggs from non-caged hens cost at least 25 percent more at the grocery store.

If a shift to non-cage production were to be imposed nationwide… [w]e would expect consumer costs to rise substantially, by at least 25 percent, and perhaps much more … Egg production in the United States would continue with reduced volumes, but consumers would pay more and consume fewer eggs because of the higher price.

Reduced volume, fewer eggs, higher prices. Sound familiar? That’s what HSUS is yammering about with its “price fixing” complaints, but its leaders want to impose the exact same thing.

Oh—and according to the Los Angeles Times, the egg farmers’ alleged “price fixing” may actually be legal under the 1922 Capper-Volstead Act, which exempts certain associations of farmers from anti-trust laws. Ultimately that’s a question for the lawyers to wrangle over. (Surely HSUS, with 30+ lawyers on staff, knows that.)

But the bottom line is that what the egg trade group was allegedly doing—giving hens more space and manipulating the price of eggs upward—is exactly what HSUS has been trying to do (albeit via a political mandate). It's almost like Wayne Pacelle didn't want the egg farmers to get any credit for leapfrogging him in the "humaner than thou" department.