HSUS Has Not Made Proper Amends for #MeToo Problem - HumaneWatch 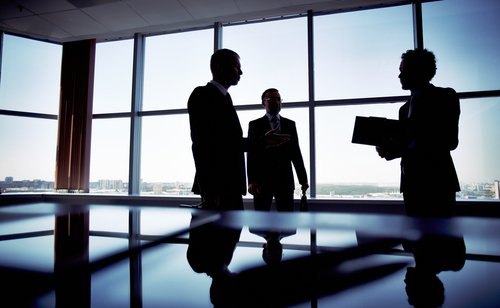 Has anyone at HSUS been held accountable for the sexual harassment scandal? 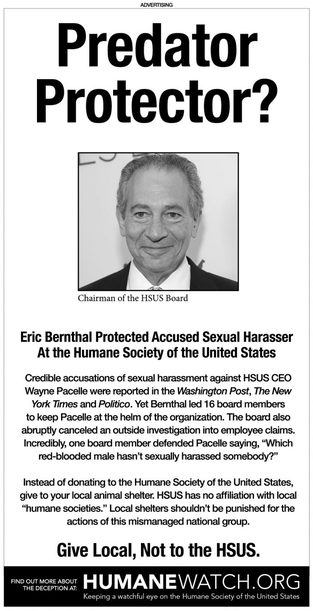 Although it has been more than a year since Humane Society of the United States CEO Wayne Pacelle stepped down amid credible accusations of sexual harassment, the public still has no knowledge what changes have been made to fix the workplace culture—or to hold leaders at HSUS accountable.

First, HSUS VP Paul Shapiro resigned in January 2018. He was allowed to leave on his own terms despite numerous women having accused him of toxic behavior in 2016. Instead, HSUS reportedly gave Shapiro a lateral transfer that seemed to some like a promotion, as POLITICO reported.

Then, a few weeks later the Washington Post reported that Pacelle was under investigation internally. When that news broke is when things truly got bizarre.

First, the HSUS board, led by Rick Bernthal, voted to close the investigation into Pacelle before it was complete. Then, the board voted to keep Pacelle as CEO.

In other words—the HSUS board didn’t believe the women or even care to hear them out.

Pacelle, meanwhile, flatly denied doing “anything untoward” to the media. And one board member told the press, “We didn’t hire him [Pacelle] to be a choir boy.”

Pacelle resigned after the public backlash became too much, but he never admitted wrongdoing or apologized to anyone publicly. Meanwhile, HSUS took almost a month to issue a meaningful public statement toward the Pacelle victims.

To combat the bad press, Pacelle’s successor, Kitty Block, instituted a “Reconciliation Process” for the organization. But what does that mean?

The press release didn’t delve into any actual details. The process offered no solace to the victims of the harassment, who are still chained to non-disclosure agreements, while Pacelle and Shapiro have moved on to new projects.

Most of the board members who voted to retain Pacelle are still on the board and there has been no actual sign of corporate culture change.

So there we are: No public accountability, and business as usual. Who enabled Pacelle’s behavior? How many execs looked the other way? We will likely never know.

It’s with good reasoning that several charity analysts have given HSUS poor ratings. But more than financial waste, HSUS has shown an utter lack of transparency and accountability. Sophisticated donors should consider whether they want to be supporting an organization that clearly does not care about doing the right thing.