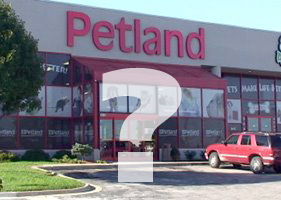 Last night the Animal Planet network premiered an investigative report targeting the Petland chain of pet stores. More than half of the documentary consisted of footage provided by the Humane Society of the United States.

While Petland's corporate leaders apparently didn't want to be interviewed on camera (wouldn't you?), we saw no evidence that the filmmakers made a serious effort to present a balanced report. (HSUS's position had about a ten-to-one advantage in terms of how many people were interviewed on camera.) As a result, what aired was an over-sensationalized attempt to link a pet store brand with puppy mills.

Here's how our television's program guide described the show:

An in-depth look is taken at the widespread practice of dog breeding and a lawsuit filed by the Humane Society of the United States against the nation's largest puppy-selling retail establishment amid claims of inhumane treatment against animals.

Talk about this lawsuit kept popping up during the broadcast. But as with the rest of this documentary, we were left with more questions than answers. More on that lawsuit later.

We live-blogged the show as we watched last night, and the contents of that experiment are preserved here. And in the interest of fairness, we e-mailed Petland's main corporate office this morning, asking for a reaction "on the record." Here's what Petland says:

Animal Planet has become a talking puppet for extremist animal rights executives at HSUS. The video was not only outdated showing footage more than 3 years old, but it was sliced and diced so much the footage of the breeders and the stores were not even on the same timeline. The “dramatization” of the family’s experience was a sickening example of using a child’s emotions to further their cause …

Animal Planet refused to allow Petland access to the program ahead of time … Petland has asked for but has not received copies of any reports filed by Animal Planet or HSUS relating to this program with the USDA or any enforcement agency.  To go under cover and film the inhumane treatment of pets and to not take action is shameful. We must therefore assume no reports were filed by Animal Planet or HSUS, clearly demonstrating that both organizations are guilty of putting money before the welfare of America's pets.

Here are our own thoughts about what we saw, together with what we learned from the broadcast—and from the more than 1,200 of you who were reading along with the live-blog and sharing your comments. We went into this expecting to have our stomachs turned. It didn't exactly turn out that way.

We should preface this by saying that we're often suspicious of advocacy organizations that throw around pejorative terms without defining them. "Factory farm" and "puppy mill" are the two best examples we can think of with regard to HSUS, but there are probably more. Prior to last night, we had never seen HSUS offer a clear definition of what a puppy mill actually was.

But now there's a definition out there. According to the Animal Planet broadcast, a puppy mill is three things: (a) it's large, (b) it's filthy, and (c) its conditions are "sub-standard." (Note that this is the filmmaker's definition, not HSUS's. But we haven't heard them disagree with it.)

So far, so good. We agree with this definition. And we're no fan of people who bring puppies into the world in gigantic, squalid, indefensible environments.

We saw a few of these during the broadcast, and they sure looked like puppy mills to our untrained eyes.

Anyway, here are those thoughts we promised you, in no particular order:

We could write much more about this program, but we think you get the idea. By all means, feel free to revisit the live-blog stream. And keep asking smart questions of the TV you see—especially when self-serving activist groups are calling the shots.