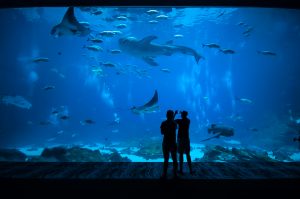 We wrote recently about Humane Society of the United States CEO Wayne Pacelle speaking at next month’s annual meeting of the Association of Zoos and Aquariums (AZA). There are a handful of zoo and aquarium directors who have drank the PETA/HSUS Kool-Aid. But Pacelle’s invitation by executive director Dan Ashe has created significant concern among AZA members. Pacelle is on record saying he envisions a future without pets—”I don’t want to see another cat or dog born.” He and his followers are also no friends of those who keep animals in “prisons.”

Also troubling for the AZA is its tin ear regarding other invited speakers. We already mentioned the speaking slot (since vacated) given to HSUS staffer Jonathan Balcombe, who says, “If you apply my rule of thumb, then very few species of fishes can adequately be kept in a tank.” He claims, “Each fish is a unique individual…with a biography.” (Do they have their own resumes, too? Will A&E now profile important fish?) His mindset is one more example of the HSUS narrative that equates animals to human species.

We also expect that another attendee will be HSUS vice president Nicole Paquette who was on a panel at last year’s annual meeting. Paquette has written against having animals in captivity and spent 10 years as a lawyer with the Animal Protection Institute. The Los Angeles Times described her as among those “who oppose keeping animals in zoos.” Paquette has written: “Imagine living in a complex family and community structure, free from human interference and exploitation. This is the life wild animals need, but that captivity denies them.”

In 2007 API merged with Born Free USA, whose policy is to eventually get rid of all zoos, to “ultimately see a day when wild animals only remain in the wild”—an echo to Paquette’s written sentiment.

While Paquette was at API, the organization opposed aquariums having marine mammals: “Whether wild-caught or captive-born, marine mammals in captivity are sentenced to a life of confinement deprived of normal social and environmental interaction. While Aquariums often defend the confinement of marine mammals by claiming that the displays are educational, there is no evidence to suggest that captive animals stimulate conservation efforts.”

Wayne Pacelle has surrounded himself and supported these people and others like JP Goodwin, a former spokesperson for the FBI-designated terrorist group Animal Liberation Front. Pacelle is no better and no worse than PETA and other wacky organizations who hire the nuttiest radicals in society.

Whatever weasel words Paquette or Pacelle use with aquariums and zoo directors, the truth is they hope every one is shut down. When Pacelle appears on stage he will be his slick non-threatening self. Like any good snake oil salesman, Pacelle knows his audience. His goal will be to assure AZA members he means them no harm (while he separately promises something different to his donors and backers). But his diplomacy in the moment should not be confused with his long-term agenda. He should have no endorsement by AZA, which naturally comes from being offered a prime speaking role at the annual conference.