Bags Fly Free (but So Do Animal-Rights Commercials) - HumaneWatch

UPDATE: Southwest Airlines has issued the following statement: "We do not condone using the Inflight PA system to share a political opinion, and we deeply apologize that it made you and others onboard uncomfortable. We certainly respect the viewpoint and opinions of all our Customers. With this in mind, we have reached out to our Inflight Management Team to gather reports and address the situation with our Employee. Again, thank you for alerting us and providing the opportunity to address the situation and ensure that it will not happen again."

Facebook is a marvelous thing. On Friday we posted a note describing a Thursday night incident that an Ohio pork producer told us about. So far, more than 45,000 people have read that Facebook post, and we can only imagine how many of them have taken some action already.

Here's the story: On the evening of Thursday, March 25, a group of Ohio farmers were on Southwest Airlines flight 556 from Baltimore-Washington International airport back home to Columbus, OH. And their friendly, perky Southwest flight attendant "Madilyn" took advantage of her captive audience to ad-lib an ad for the Humane Society of the United States's planned Ohio ballot initiative over the aircraft's PA system.

The following is how Duane, one of those farmers, described the show in his letter to Southwest. We're reprinting it with his permission, and leaving out the flight attendant's last name. (You can put down the torches and pitchforks. We're not telling.)

I operate a small family farm with my wife and help from my oldest son who we are trying to work into the operation full time over the next 4 to 5 years. We farm about 1000 acres of grain crops and raise about 7,500 head of hogs between the two of us. This may sound like a lot but it is small in today's standards.

I am also a Board Member of the Ohio Pork Producers Council. This organization has been using your Airline for many years because of your good service and affordable prices. Today I along with two other Family Farmers and a Representative of [DELETED] Feeds were returning from a Legislative Conference in Washington DC with our Ohio Representatives and Senators. We were on Flight 556 from BWI to Columbus, Ohio and I was seated in row 14, window seat, co-pilot side of the plane.

Upon touchdown at Columbus the head stewardess Madilyn [DELETED] welcomed us to her home town of Columbus "where there are great people and an important ballot initiative on the ballot, and please go to OhioHumane.org to get more information." This organization is trying to put my family farm out of business. This group is funded by the Humane Society of the United States which is a vegan animal rights group that raises money by getting people to think they are part of your local Humane Society that takes care of local dogs and cats …

Just ask Yellow Tail Wine and Pilot Service Stations just how divisive of an issue this is for a large Corporation to be found with any kind of association with HSUS or one of its affiliates.

I would like to have contact with Madilyn [DELETED] for this to be a teachable moment, I am quite sure that a visit to my farm and an opportunity for me to present my side of the story will, if not change her mind, at least enlighten her view. I did not speak with her but I know that the two farmers sitting in the front of the plane did. I just got her name. She was shaken and apologetic to [DELETED]. The flight was already an hour behind and there were a lot more people waiting to get off the plane, so I did not want to press the issue there.

In closing I feel very strongly that those type of comments should not be voiced in that type of environment. You just never know who you might offend. 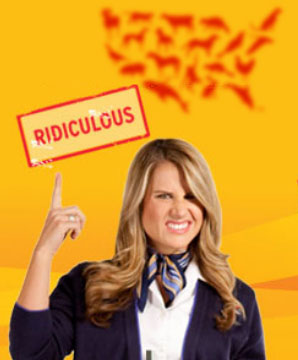 You can send your own views on the subject to Mr. Paul Flaningan at Southwest Airlines ([email protected]). If you're as curious as we were about that "WNCO" Internet domain name, it's an abbreviation for the "We're Nuts" Company, an inside joke at Southwest. (Many of the airline's planes have aviation "tail numbers" ending with "WN" for the same reason.)

You can also weigh in on Southwest's Facebook wall or with any of the "contact us" options on the airline's website. And if you live in Ohio, you can write to the Columbus Dispatch's travel writer, or the paper's Senior Editor, to see if they might cover the story.

Duane informs us that Southwest's PR people have been in touch, and that "several meetings" are already scheduled between the flight attendant and her supervisors. He also heard  from the company's Vice President of In-Flight Operations. Duane is still requesting a meeting at his farm. And he's actually glad he was on that plane last Thursday. Otherwise, he writes, "this could have continued until the November Election."

We weren't quite sure what to make of all of this at first. Was this an indication of a whole airline that trains its staff to wear their politics on their uniform sleeves? Or was it just one flight attendant exercising poor judgment?

It turns out there may be a third explanation. This comes from a second witness—one of the pork producers on Flight 556 who was sitting near the front of the plane. (Again, we're sharing this with his permission, but he asked not to be identified.)

There was a guy that I saw get on the plane with an HSUS logo on his fleece. Based on the flight attendant's reaction when I told her that I was very upset, and that this organization was trying to put my family’s farm out of business, she looked like she really had never thought of it that way and was very apologetic. I am just guessing, but maybe that guy put her up to it and she thought it was a good idea so she did it. She was pretty shook up after I got done talking to her, so my guess was that she had not thought this all the way through. But it still flabbergasts me to think about what she did by giving them a plug over the PA system.

The plot thickens. We have no idea who the mystery HSUS staffer was. Maybe he's a mid-campaign replacement for the former HSUS Ohio Director whose position was recently eliminated. Time will tell. And Southwest hasn't made any public statement about this incident. But hey! This is America. So … "Ding! You are now free to move about the country on some other airline."