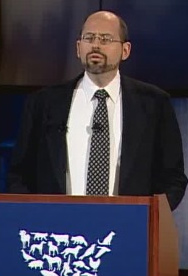 Meet Michael Greger. He’s the Director of Public Health and Animal Agriculture with the Humane Society of the United States and a vegan nutrition specialist. Greger has made a name for himself at HSUS by attempting to tie the spread of diseases like “bird flu” and H1N1 (wrongly called “swine” flu) to the consumption of animal protein. It’s a perfect line for a group that promotes meatless eating, and Greger is the perfect oddball to articulate it.

But lately Greger has been appearing more and more with company that's several time more odd than he is: groups associated with a Taiwanese cult leader who calls herself the “Supreme Master” Ching Hai.

Ching who, you ask?

The Supreme Master Ching Hai, leader of what is reportedly the fastest-growing cult in the world, is a 44-year-old divorcee with a penchant for funny hats, tacky jewellery and gold lamé.

As she steps into her shiny limousine, an attendant dressed like a bridesmaid fussing with the three-metre satin train of her self-designed gown, the Master looks not unlike a young Imelda Marcos.

The hundreds of thousands of devotees of Vietnamese-born Ching Hai—including several thousand Australians in Sydney, Canberra, Brisbane, Melbourne and Perth—wear the master's portrait in a laminated pendant around their necks to stay in touch with the master's "godpower."

A rabid anti-communist, the Master inspires feverish adoration like a kind of deity-cum-rock star among her followers who, on mass meditation expeditions, don matching luminescent hats for the obligatory 2-1/2 hours' daily invocation of her name in a heavenly chant.

Last week, in a mass spiritual gathering in Taiwan, the Master's disciples—as she insists they call themselves—were meditating for eight hours a day to "purify the brutal atmosphere of the world." 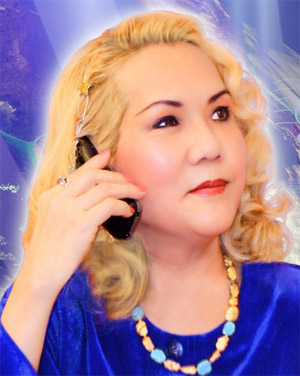 With a bumbling ally of President Clinton serving as cheerleader and unofficial accountant, members of a tiny Buddhist sect were cajoled into donating $400,000 to Clinton's legal defense fund, a sect official told a Senate panel Thursday.

The sect's Taiwan-based leader, Master Ching Hai, who traveled to New York for the key meeting accompanied by controversial Clinton ally Yah Lin "Charlie" Trie, told her non-political adherents that the money was meant to "help a person in need … just like homeless people or disaster victims," the official said …

Master Ching Hai, 47, [is] a Vietnamese native who is said to have had a child by an American soldier, married a German doctor and later settled in Taiwan and became a Buddhist nun.

According to a report given the panel, a sect she started and named after herself emphasizes spiritual improvement, self-knowledge, a vegetarian diet and occasionally drinking the leader's therapeutic bath water.

If that doesn’t paint the picture for you, Ching Hai is promoted at websites as God’s "Immediate" and "Direct" Contact.

More importantly for our discussion here, Ching Hai preaches a quasi-Buddhist lifestyle that requires vegetarian or vegan diets. She claims that people need to “go veg” in order to “save” the planet. (She has also owned and operated as many as 56 vegetarian restaurants, but we digress.) There’s even “Supreme Master TV” that broadcasts Ching Hai’s veg message globally via satellite in 40 different languages.

So what’s the HSUS connection to this malarkey? In November, Michael Greger spoke at a “Washington DC Climate Change Conference” hosted by Ching Hai’s international association. There’s an interview of Greger on Supreme Master TV in which he talks about flu pandemics. Supreme Master TV also features a Greger lecture from last September’s conference on South Korea’s Jeju Island. In September Greger sent a video message to a Ching Hai global-warming conference in Peru. He's also featured in a Supreme Master TV video about a supposed connection between AIDS and the H1N1 "swine" flu.

Why is the Humane Society of the United States throwing his hat in the ring with someone who’s described as a cult leader? Can Greger’s appearance at “Supreme Master” events and on “Supreme Master TV” be considered an official HSUS endorsement of Ching Hai?

If Greger wants to tap into Ching Hai's godpower and put his credibility (and HSUS’s) on the line, that’s his prerogative. Maybe the next Scientology conference has an open speaking slot too. But when a top dog at America's biggest animal rights group willingly hangs around with a cult leader, well … sometimes these things write themselves.