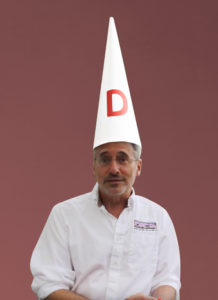 Last month, Harvard’s “animal law” program hosted a two-day event on the federal Animal Welfare Act whereby activist lawyers plotted how they would change the law so that they could start a deluge of litigation against animal owners. The Harvard program is run by a former PETA lawyer and a former litigator for the Animal Legal Defense Fund (more PETA lawyers, essentially), so its agenda is exactly what you’d expect: Using the legal system to push animal liberation. But there was one speaker who, at first glance, would seem out of place: Detroit Zoo CEO Ron Kagan.

It seems odd that a guy in charge of a zoo would show up to hobnob with radical activists who want to shut down these facilities. But after a little digging, it begins to make sense. The only mystery is why the Detroit Zoo’s board continues to keep him around.

The first thing you should know about Ron Kagan is that he’s a known liar. Kagan was docked pay in 2007 when it emerged that he had lied about receiving a Ph.D. from Hebrew University. The Detroit City Council—the city owns the zoo’s land and animals—gave the non-doctor a public vote of no confidence. Yet despite that flap, in recent years Kagan’s pay has skyrocketed. In 2014 he earned $767,000, a jump of 162% in just 3 years, and he even gets housing on the Detroit Zoo grounds. Keep in mind that taxpayers from this recently bankrupt city are supporting the zoo in part.

But more disturbingly, Kagan has chosen to ally himself with PETA. In a Tedx speech last year, Kagan calls PETA his “partner”:

You’ll notice here just a small handful of partners that we work with on lots of issues. PETA is one of them. If people who work in zoos and aquariums don’t define themselves as people for the ethical treatment of animals, who would? So we don’t view them as the enemy, we view them as partners.

PETA as a partner for zoos? PETA wants to shut down all zoos. PETA calls zoos “prisons” and claims zoos are a form of “slavery.” PETA would rather—by its own admission—see elephants killed than be cared for in a zoo, much as the group has killed 35,000 animals by its own hand. Kagan has also received a “Backbone Award” from PETA, which he boasts about in his LinkedIn profile.

Kagan’s also been an ally of PETA’s big brother, the Humane Society of the United States—even going against the Association of Zoos and Aquariums (AZA) to do it. Kagan brought HSUS CEO Wayne Pacelle out to Detroit in 2011 for a symposium, and HSUS gave Kagan a slot at its Taking Action for Animals conference the following year. Detroit Zoo also signed on to a petition, alongside HSUS and other radical groups, submitted to the USDA in 2013 to ban people from taking pictures with baby tigers or bear cubs. Not a single other zoo was a petitioner—in fact, the AZA has serious concerns about the petition.

At the Harvard law event last month, Kagan argued for enforcement of the Animal Welfare Act to move from the USDA to the Department of Justice. Think about that for a second. Instead of inspections and enforcement being done by USDA staff, does Kagan think they should be done by the FBI, US Marshals, or DEA? Does he want the Hostage Rescue Team to helicopter in armed with automatic rifles if a bonobo’s cage isn’t clean? We’re being a tad facetious, but the idea that we should move animal welfare enforcement to a more militaristic branch of the federal government ought to concern everyone, to say nothing of the wisdom of diverting resources that are better spent fighting drug cartels and terrorists.

At the end of the day, there are people who believe in zoos—that is, most of society—and a small band of radicals that wants to do away with our ability to have animals. It’s clear which side Kagan is on. The question is, will the zoo community leadership keep letting this fox in the henhouse?