Do Your Research Before Donating to Ukrainian Pet Charities - HumaneWatch 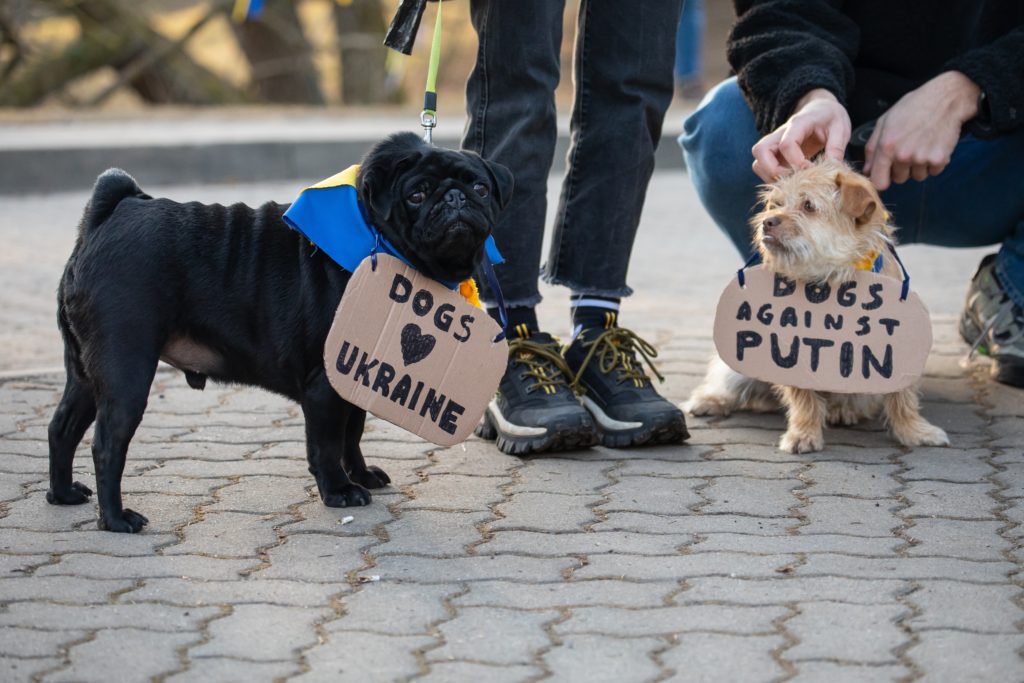 One of the most widely shared images of the horror unfolding in Ukraine was that of a man, Andriy Kulik, attempting to console his dog who was paralyzed by fear after a nearby explosion.

The image broke the hearts of pet owners everywhere and it was a stark reminder that the devastation of this senseless war is weighing on everyone in Ukraine – even four-legged family members.

Some of the biggest scams –including help-for-ukraine[dot]eu, tokenukraine[dot]com, supportukraine[dot]today, and ukrainesolidarity[dot]org – have already started raking in cash with no intention of helping the Ukrainian people or the nearby countries who are supporting refugees.

In addition to the scams, there are also philanthropic efforts that may accidentally create more problems than they solve.

Some groups are trying to move shelter animals to countries neighboring Ukraine. That’s probably the best that can be done in this situation.

But an increasingly popular trend is to bring rescue animals all the way to the United States. While this may seem like a great idea, relocating pets carries more risk than reward, particularly in the age of COVID.

In 2015, many animal charities including Humane Society International sent teams to South Korea to collect dogs who were set to be part of the dog meat trade.

But shortly after an early shipment of dogs from Korea arrived in the Chicago area, local veterinarians started to notice that many of the dogs were sick. Not only were they sick, but they were also carrying a type of dog flu that had never been seen before.

Before veterinarians could get a handle on the outbreak, it had spread to several states, infecting thousands of American pets and prompting the closure of several pet shelters. Researchers at Cornell have traced this outbreak to international pet rescue missions.

Animal rescue charities have already had their eyes set on Ukraine as a potential place for pet rescues. Ukraine is believed to be home to puppy mills in which dogs are bred in inhumane conditions. This problem captured headlines in 2020 after a Ukrainian International Airlines plane arrived in Canada with roughly 500 French bulldog puppies on board – 38 of which had died during the flight. According to reports, the surviving puppies were dehydrated, weak, and vomiting.

According to the Centers for Disease Control and Prevention, “Many dogs are bred irresponsibly in large numbers in ‘puppy mills’ overseas. … Importers then fly them as cargo in large batches, claiming them as ‘rescue’ dogs, valued at $0 on their paperwork, and allowing the importers to evade entry and broker fees.”

Some “rescue” groups that solicit donations may earn additional money in pet trafficking. This scam has become lucrative thanks to some city bans on selling domestically bred pets at stores. The result is creation of a black market for animals from foreign sources.

Not everyone is aware of the risks of moving pets around the planet. Several charities and private actors have been collecting dogs to be sent elsewhere for adoption. The last thing these friends need is to be crated and sent flying around the world with lots of unhealthy peers. It’s a stressful journey for the animals, and many may perish before landing.

It’s normal to feel a need to help when crises arise, but it’s worth doing your research to find the most effective relief for your heart and the best use of your cash.