Big news came out over the holidays when the ASPCA announced that it would pay Feld Entertainment, owner of the Ringling Bros. circus, almost $10 million to settle a federal lawsuit accusing the ASPCA and others of violating the Racketeer Influenced and Corrupt Organizations (RICO) Act. It’s a crack in the defense, and we’re sure that leaders of the Humane Society of the United States—which is still a defendant in the litigation—didn’t sleep well that night. Feld’s lawyers also publicly released evidence implying HSUS CEO Wayne Pacelle’s involvement, which should add to their concern.

Some background: The Fund for Animals (FFA, which merged with HSUS in 2005), the ASPCA, and others sued Feld about 10 years ago under the Endangered Species Act. Their litigation depended on a former Feld “barn helper” who says that he was aesthetically injured by Feld’s alleged elephant abuse.

The litigation dragged through the court for years until a judge dismissed it in 2009. In his dismissal, the judge outlined a scheme by which animal rights groups—including the ASPCA—had paid the former Feld employee almost $200,000. Some of the money was paid directly to the witness, some of it went through the plaintiffs’ law firm (MGC), and some of it went through a nonprofit group controlled by the plaintiffs’ lawyers called the “Wildlife Advocacy Project” (WAP). (Is that enough acronyms for you?)

Here’s how some of that payout got disbursed to the witness, according to court documents:

More importantly, the judge found that the payments “were not disclosed initially in discovery, by both omissions and affirmatively false statements.” The witness himself, the judge concluded, was “essentially a paid plaintiff and fact witness who is not credible.”

Now, Feld has released evidence showing that the Humane Society of the United States itself paid money to WAP. The check is signed by HSUS CEO Wayne Pacelle and treasurer Tom Waite: 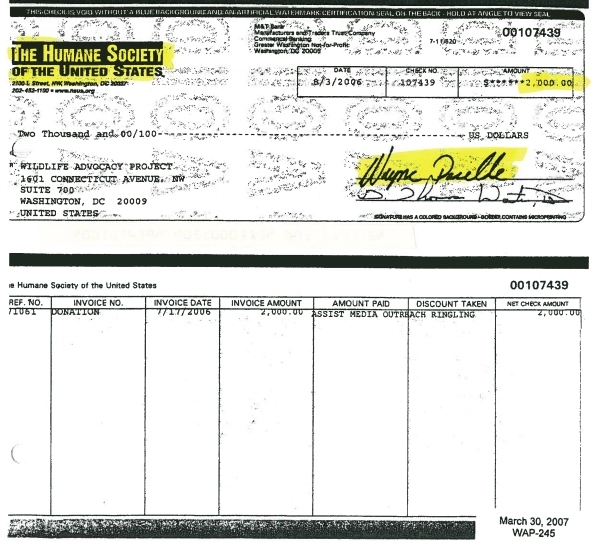 The check was sent to WAP with a cover letter from HSUS vice president Jonathan Lovvorn, who is individually named as a defendant in the racketeering lawsuit. Before Lovvorn moved to HSUS in 2005, he was a partner at MGC and according to court documents was involved in the animal-rights litigation against Feld.

Back to the present. HSUS’s statement in response to ASPCA’s $9.3 million settlement has been weak. HSUS points out that it wasn’t a party in the initial litigation against Feld. So what? As this bit of evidence shows, HSUS gave money to a front group that paid a witness, and the HSUS bagman delivering the payola was a former partner at the plaintiffs’ law firm, which itself had directly paid the witness as well.

In all, HSUS’s response is about as effective as a sixth-grade playground comeback.

Wayne Pacelle’s leadership could already be under question after HSUS finds itself in federal court. Again. But with Pacelle signing at least one check, there could be more to his involvement.

Let’s ask the old Watergate question: What did Wayne Pacelle know and when did he know it?

We’ll let you know if we get an answer. Hopefully, the HSUS board is interested in finding out, too.