1997 Editorial by Michael Markarian, published in "The Abolitionist" - HumaneWatch 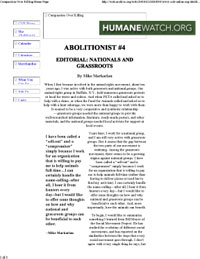 In this editorial essay from 1997, HSUS Chief Operating Officer Michael Markarian waxed philosophical about arift between grassroots animal-rights groups and larger national organizations like those that employed him. At the time, he worked for the Fund For Animals as its Director of Campaigns and Media.

In one part of the essay, Markarian draws distinctions among four types of animal activists, providing examples of “effective” and “ineffective” versions of each. Along the way, he appears to defend illegal activity in the name of “animal liberation,” a position that HSUS has takengreat pains to publicly avoid:

While the “citizen” activist says “YES” to that which is right, the “rebel” activist says “NO” to that which is wrong. Direct action, civil disobedience, hunt sabotages, and Animal Liberation Front activities all fall under this category. Activists purposely breaking laws that are unjust, such as hunter harassment laws, or committing acts of civil disobedience to help animals, are effective rebels because they tie the movement’s issues together with First Amendment, freedom of speech, and civil liberties issues. A perfect example of effective rebellion is an Animal Liberation Front raid on a laboratory that frees puppies from its confines and exposes video footage of the researchers torturing the animals. Sure, the activists broke the law, but all of their activities focused directly on saving animals and exposing cruelty. (emphasis added)

This essay was published in The Abolitionist, the quarterly newsletter of a Washington, DC-based animal rights group called Compassion Over Killing. Humane Society of the United States CEO Wayne Pacelle later hired three of that organization’s leaders.