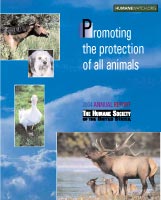 This is the annual report that HSUS published to describe its program priorities in 2004. It contains a message from president Wayne Pacelle to supporters, testimonials from a selection of HSUS employees, and a summary of its program accomplishments and consolidated financial data.

The 2004 annual report noted the merger between HSUS and the Fund for Animals. HSUS programs that year included the second annual “Design Against Fur” competition, testimony to prohibit the use of elephants in circuses, lobbying efforts at both the state and federal level, and the publication of its “Manure Money Pit” report on large-scale livestock farming. 2004 also marked the 50th anniversary of HSUS.

HSUS removed this document from its website in October 2010.