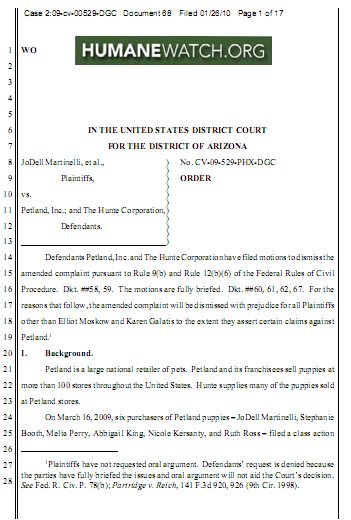 In March 2009, a group of plaintiffs organized by the Humane Society of the United States filed a class-action lawsuit against the Petland pet-store chain and one of its pet suppliers (The Hunte corporation), alleging that Petland had orchestrated a scheme to defraud its customers by selling sick puppies that were raised in “puppy mills” and other environments where veterinary illnesses are pervasive.

In August 2009, a federal judge in Arizona dismissed the entire lawsuit, but allowed the plaintiffs an opportunity to re-file the case.

In January 2010, most of the claims in that re-filed case were dismissed a second time. This document is the judge’s ruling, which permitted only a few narrow claims to proceed against Petland.

One plaintiff sued Petland under the Maine Unfair Trade Practices Act. That claim survived the judge’s scrutiny because she is a resident of Maine.

That same plaintiff and one other were also permitted to proceed with their lawsuit against Petland on the ground that the company received “unfair enrichment” because of fraud. This narrow claim was only allowed to proceed because those two plaintiffs alleged that specific Petland employees had toldthem that the dogs they purchased were not raised in “puppy mills” or other unsanitary conditions. (It’s likely that Petland will contest their claims at trial.)

All other claims in this lawsuit—including the RICO claims—were dismissed.