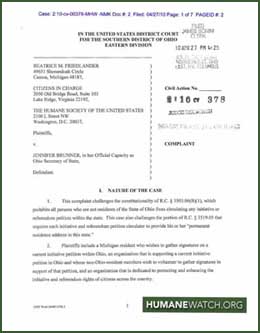 In Friedlander v. Brunner, the Humane Society of the United States sought to invalidate an Ohio law holding that only residents of the state can gather signatures to put a legislative initiative on the ballot. The suit was filed in the U.S. District Court for the Southern District of Ohio.

Beatrice M. “Bee” Friedlander, a Michigan lawyer who serves as Managing Director of the Animals & Society Institute (and was a past president of Michigan’s “Attorneys for Animals” group), was the first named plaintiff.

HSUS’s stated reason for litigating this in late April 2010 is that it had “filed a Form 15 with the Ohio Secretary of State, stating that it will provide compensation to an individual or entity for supervising, managing, or otherwise organizing an effort to obtain signatures on a statewide initiative petition.”

A reasonable analysis is that HSUS suddenly found that (1) it was behind schedule gather signatures exclusively through the use of in-state volunteers; and that (2) it was legally prohibited from bringing a “hired gun” in from out-of-state.