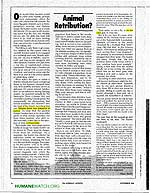 This is a one-page essay titled “Animal Retribution?” written by Wayne Pacelle and published in November 1988 by The Animals’ Agenda, a now defunct magazine. In it, Pacelle makes clear his disdain for hunting as well as hunters, even calling them “coreligionists” and describing an anecdotal hunting injury as one of “rare instances of justice.” Pacelle also refers to ants as though they were people (writing “an ant who…” instead of “an ant that…“) while downplaying the threats of large animals by stating that a fly, too, can be dangerous.