e’ve written before about how the Humane Society of the United States—not affiliated with any local humane societies—employs a number of animal liberation radicals in its leadership. Their history ranges from a chief policy officer who defended tactics of the Animal Liberation Front (whose illegal actions have done millions in damages) to contributors to a terrorist-cheerleading magazine.

We’ve unearthed some new information about Matt Prescott, HSUS’s food policy director. Prescott is well known for developing a campaign while at PETA comparing farms to Nazi concentration camps—by implication calling farmers gas-chamber operators or calling Jews animals. The campaign rightly earned strong condemnation from Jewish leaders and trivialized the suffering of humans, while the U.S. Holocaust Memorial Museum said that Prescott was “not honest” in how he would be using its images.

It turns out that’s not all Prescott was up to. He also was an active participant in a listserv about Earth First!, a radical environmentalist group. Started in the 1980s, EF! is a “warrior society” that takes a “by any means necessary” approach to “defending mother earth.” EF! crimes include arson, sabotage, and assault. According to the FBI, EF! members in England formed the Earth Liberation Front, which expanded and became considered a top domestic terrorist threat in the U.S. after engaging in arson and other illegal activity along with its sister group, the Animal Liberation Front.

Prescott considered himself an Earth First!er. He signed one email, “matt prescott, NH EF!” It’s unclear how active he was in EF! activities—if at all—but Prescott didn’t seem to have any problem with the EF! attitude of law-breaking.

Prescott was arrested in 2001 in Maine for trespassing in conjunction with a Greenpeace protest. He was arrested in 2003 as part of a PETA protest outside of Vogue offices, along with Patrick Kwan, also now with HSUS. And in one email to the EF! listserv, Prescott stated his broad defense of illegal activities, including arson:

By burning down a vivisection lab, not only does the ALF [Animal Liberation Front] save the lives of innocent LIVING beings, but they take a huge stand against the notion of property being equal to life….While I obviously beleive [sic] STRONGLY in [legal] methods, I also believe in the actions of the ALF and other such groups.

In another email, representing “The GreenFire Collective of New Hampshire” (whatever that was), Prescott wrote, “We actively participate in and endorse protests, direct action, and non-violent civil disobedience.” Direct action is a code phrase for illegal acts designed to cause economic loss or property destruction—like arson.

So Prescott worked for groups like PETA and Farm Sanctuary, but also believed in burning down research labs. And if that wasn’t bad enough, Prescott even campaigned for the release of convicted murderer Leonard Peltier—someone who shot and killed two FBI agents.

And yet, Prescott calls livestock farmers the bad guys. His moral compass is about as backwards as it gets.

The founding of Earth First! was reportedly to create a group more extreme to draw fire away from other environmental groups. “The people that are easily named extreme make the people who were extreme seem suddenly reasonable,” said a former Sierra Club executive director.

That’s what groups like PETA do for HSUS. As Michael Spector wrote in The New Yorker in 2003, “It has been argued many times that in any social movement there has to be somebody radical enough to alienate the mainstream–and to permit more moderate influences to prevail. For every Malcolm X there is a Martin Luther King, Jr., and for every Andrea Dworkin there is a Gloria Steinem. Newkirk and PETA provide a similar dynamic for groups like the Humane Society of the United States.”

Prescott, a veteran of PETA who’s now at HSUS, surely knows this. 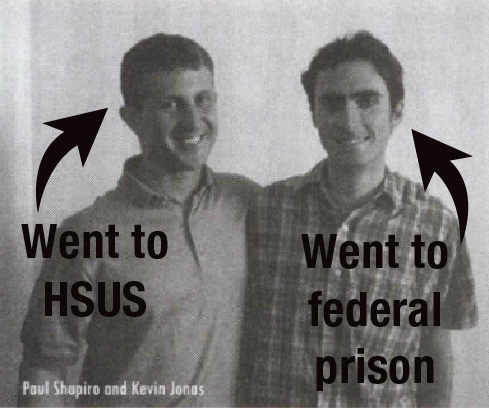 We haven’t seen any statements from Prescott disavowing his past support for illegal Animal Liberation Front tactics. Nor have we seen anything from him stating that he doesn’t still believe that farmers are running Nazi concentration camps.

HSUS can create a slick marketing campaign with cat and dogs, but we’ll make sure people know the truth about the people running the organization, from Matt “Farmers are Nazis” Prescott to Wayne “I don’t love animals” Pacelle.

These days, Prescott is a public figure going around sending “Hey, hope you are having a great day” emails on HSUS’s behalf to unsuspecting companies and trying to manipulate them into making anti-farmer statements. The logical thing, then, is to make sure these companies are no longer unsuspecting.