Does "4-H-Gate" Send a Chill Up Chris Matthews's Leg? - HumaneWatch 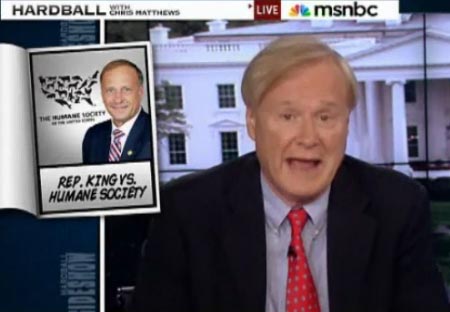 UPDATE: Hardball with Chris Matthews has a Facebook fan page. There aren't many fans over there, but it might still be a good way to get Matthews' attention.

This week in Republican Congressman Steve King's home state of Iowa, two controversies about the Humane Society of the United States collided. First there was "4-H-Gate," in which the national 4-H leadership still hasn't appropriately apologized for giving HSUS activists access to its young members during a recent 4-H convention. And then HSUS's s latest egg-farm propaganda video hit Des Moines.

You can hardly blame Rep. King for defending his farming constituents against an organization that wants to put them out of work. Here's a quote from his press release:

The Humane Society of the United States is a political machine masquerading as an umbrella organization for local humane societies. HSUS bills itself as an animal care organization but it spends less than 1% of its $100 million annual budget on direct animal care. Instead, HSUS solicits money from well-intentioned but often uninformed animal lovers and uses these donations to lobby Congress for an anti-meat, anti-animal agriculture agenda. HSUS is run by vegetarians with an agenda whose goal is to take meat off everyone’s table in America.

Rep. King might be in error about the "direct animal care" line, since HSUS does run two (reportedly overcrowded) horse sanctuaries, a bird sanctuary, and a road-kill rehab. We think what he meant to say was that less than 1% of HSUS's budget is shared with hands-on pet shelters. Which is absolutely true—as is the rest of the Congressman's statement.

But Hardball host Chris Matthews thinks otherwise. This could be a teachable moment. The video is after the jump.

We think this is just the sort of situation that HumaneWatch was built for. If you feel so inclined, reach out to Chris Matthews or his NBC producer John Reiss, or write to the Hardball staff e-mail address. We're not going to insult your intelligence by giving you a form letter, but we would like to suggest that you remain polite, politically neutral, and respectful. Share whatever you think is the most important information to know about HSUS. And by all means, let the Hardballers know that they can come to this blog for factual information and source documents. (And we're not a bad interview…)