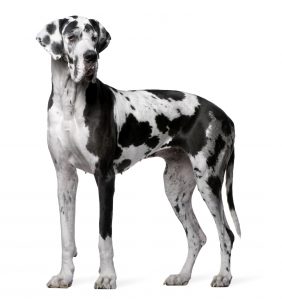 Last week the trial began for a New Hampshire woman accused of animal cruelty. Over the summer, HSUS seized 84 Great Danes from her and has had custody of the animals in a secret location since while the criminal case against the woman has proceeded. However, three dogs have since died in HSUS custody, and the defense is probing into the circumstances.

Here’s what a veterinarian testified:

Moffitt testified that the report showed the dog had partially digested food in its stomach, and ingestion of a lot of food in one meal is associated with that condition.

And here is HSUS’s response:

“The Great Dane who passed away on Sept. 20, named Bonnie by her caregivers, left our veterinarians, staff and volunteers heartbroken, but we are also grateful she was under loving care and passed in a clean and enriched living environment. Two days before she died, Bonnie was seen by two veterinarians and showed no outward signs of illness. On the morning of her death, staff checked on Bonnie twice, and again she showed no signs of illness.”

Putting aside the spin of HSUS’s statement, it doesn’t sound very believable. The condition is painful and the dog would have shown outward signs of distress. The veterinarian implies that the condition could have been caused by caretakers giving the dog too much food. HSUS raised over $100,000 following the seizure—one would think it could do better.

There are still two more dogs that died, and we’re curious what the details are there. The woman on trial may or may not be found guilty, but based on the evidence for this dog, should HSUS be charged as well?