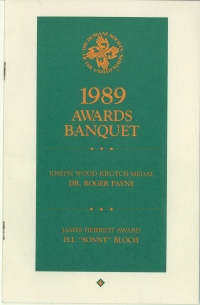 Here’s an oldie but a goodie.

In September 1995, Animal People News published a piece titled “Triple Trouble for HSUS.” It’s a long but good read that offers insight into some major gaffes at HSUS. We’ll give a summary here, but feel free to read the whole thing.

The first part of the article follows Wayne Pacelle, then HSUS’s Director of Legislative Affairs, in a lobbying mission to crack down on so-called "puppy mills." (Yes, this was an issue 15 years ago…) Apparently, Pacelle opted not to rally around a letter circulated by more than 100 Congressmen—one that would have demanded tough new enforcement standards from the U.S. Department of Agriculture. Instead, he cozied up to then-Senator Rick Santorum (R-PA), whose own letter to USDA was pale and watered down by comparison.

Why? Animal People wrote that "well-placed persons" indicated that "Pacelle opted for the highest possible profile on the issue, instead of alignment with other humane groups and the signers of the [stricter] letter."

For the uninitiated, "high profile" issues are those that translate into fundraising outcomes, not policy victories. Could it be that every dog breeder in America would already be operating under tougher standards if Wayne Pacelle hadn't been led around by HSUS's wallet in 1995? It's a distinct possibility.

Episode number two in the "Triple Trouble" story was even juicier.

In 1995, HSUS accused David Wills, then Vice President for Investigations, of embezzling tens of thousands of dollars. Then the group filed a lawsuit against Wills to recover the money. (He counter-sued.)

Wills had been considered a potential replacement for then-HSUS CEO John Hoyt. But that all went up in flames, Animal People wrote, after he was fired for sexually harassing co-workers and charging personal dinners to company accounts. Wills eventually pled guilty to one count of theft in 1999, received a six-month sentence, and paid $67,800 in restitution to HSUS. (Wills was also controversial before he came to HSUS, owing to a failed merger between HSUS and the Michigan Humane Society and yet more embezzlement accusations. But that’s writing for another day.)

The final piece of the “Triple Trouble” saga concerned the indictment of former HSUS board member and investment-advice radio host Irwin H. "Sonny" Bloch, who did time in federal prison for tax evasion. Bloch died in 1998 before he could be sentenced for bilking his listeners out of $21 million in a scheme that presaged the ugly Bernie Madoff scandal.

An old document in the Center for Consumer Freedom's files, dating from 1989, shows that HSUS gave Sonny Bloch its "James Herriott Award" at an annual banquet. This is the sort of "honor" that usually indicates a large financial contribution. Oops.