"[He] whose faith is weak eats only vegetables" [Romans 14:2] - HumaneWatch 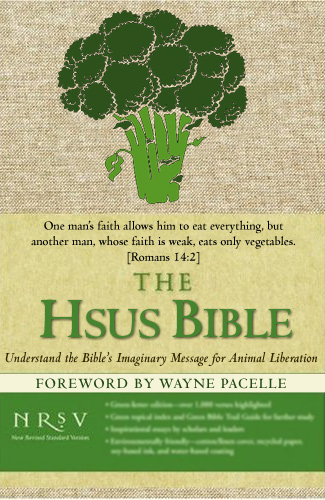 HSUS has a new evangelical cheerleader, and he's bringing the Gospel According to Wayne to a church near you. Dr. Matthew Sleeth preaches a sort of quasi-Biblical environmentalism; since it's in line with what HSUS wants to promote in the short term, Sleeth will be showing an HSUS video as part of his Earth Day religious simulcast.

Here's how Wayne Pacelle began his essay on Friday:

Concern for animals is Biblical, Dr. Matthew Sleeth told me during a 30-minute interview I recently conducted by telephone. Christine Gutleben, director of Faith Outreach for the Humane Society of the United States, told me that I must talk to this brilliant and passionate Evangelical Christian, and I was absolutely energized by our discussion. A former physician, Dr. Sleeth left medicine behind to devote himself to healing others in a different way. Importantly for the HSUS, which has a rich tradition of clerical leadership, he is at the forefront of an emerging movement within contemporary American Evangelical Christianity that is reclaiming Christianity's history of animal protection.

A bit of housekeeping before we dig into this:

It's amazing that it takes that long to deconstruct just one Wayne Pacelle paragraph. But let's get back to this April 21 Earth Day telecast.

Matthew Sleeth, whom Grist magazine calls an "evangelical environmentalist," did grow up on his family's dairy farm. So he instantly knows more about cows than pretty much anyone at HSUS. But perhaps he's been suckered into thinking that Wayne Pacelle is somehow committed to preserving at least some of the smaller animal protein "factories" dotting America's landscape. (We've made no secret about our belief that this isn't true at all.)

However it happened, Sleeth and Pacelle now appear joined at the hip—so much so that their messages are being commingled for Earth Day. Pacelle writes:

On April 21, the eve of Earth Day, [Sleeth's] organization will host an international simulcast from Northland Church in Orlando, Florida that thousands of churches nationwide are expected to tune in to. A short HSUS video will be shown during the beginning of the broadcast.

We don't know if "thousands" of other churches will join in, but as of this writing more than 350 are listed on Sleeth's web page as "participants." (Is your church one of them? You might want to let your pastor or rector know about HSUS's ultimate aim.)

For the uninitiated, the religious point of view that the Florida mega-church behind this Earth Day event is driving is something called "creation care" theology. We know we're vastly oversimplifying here, but this is essentially a way to integrate the politics of modern-day environmentalism into Christian worship. Here's how the Evangelical Environmental Network, which pioneered the concept, describes its core mission in its 2008 tax filing:

Evangelical Climate Initiative (ECI) — Through ECI, the organization organizes and participates in public education and advocacy campaigns and declarations that relate to the spiritual and moral aspects of public policies on energy and the environment.

You get the idea. As one "Creation Care For Pastors" organization puts it, "We like the word 'creation' even better than the word 'environment'." (Spiffy.)

We think there's a case for Christians to make that all of creation should be the subject of humanity's wise stewardship. We totally get that. But at the same time, since Wayne Pacelle turned the Humane Society of the United States into a vegan advocacy organization, We think it's fair to judge the group's intentions through that lens. And there is simply nothing biblical about veganism.

Swearing off animal protein is an okay choice for people who want to do it. Far be it from us to tell anyone how to eat. But let's not kid ourselves that the Bible endorses it as the preferred way to go.

About five years ago we published a booklet through the Center for Consumer Freedom titled Holy Cows: How PETA twists religion to push animal "rights."  It might be worth looking at again now. We're not saying that HSUS is anywhere near as over-the-top as PETA. But it appears both groups are forgetting their scripture.

Here's that "Holy Cows" report. Read the whole thing if you wish, but we especially recommend the center-spread, starting on page 23 of the PDF. It's a collection of scriptural references that explicitly endorse the sort of omnivorous diet that HSUS's vegan leaders wouldn't be caught dead eating.

Here are just a few of our favorites.

Everything that lives and moves will be food for you. Just as I gave you the green plants, I now give you everything. [Genesis 9:3]

The Lord said to Moses, “I have heard the grumbling of the Israelites. Tell them, ‘At twilight you will eat meat, and in the morning you will be filled with bread. Then you will know that I am the Lord your God’.” [Exodus 16:11]

When the Lord your God has enlarged your territory as he promised you, and you crave meat and say, “I would like some meat,” then you may eat as much of it as you want. [Deuteronomy 12:20]

The son said to him, “Father, I have sinned against heaven and against you. I am no longer worthy to be called your son.” But the father said to his servants, “Quick! Bring the best robe and put it on him. Put a ring on his finger and sandals on his feet. Bring the fattened calf and kill it. Let’s have a feast and celebrate.” [Luke 15:21-23]

One man’s faith allows him to eat everything, but another man, whose faith is weak, eats only vegetables. [Romans 14:2]

Eat anything that is sold in the meat market without asking questions for conscience’s sake; for the earth is the Lord’s, and all it contains. [1 Corinthians 10:25-26]

For every creature of God is good, and nothing is to be refused if it is received with thanksgiving. [1 Timothy 4:1-4]

And lest anyone think we're going off the deep end and saying that God commands everyone to eat cheeseburgers, that would of course by silly. But so is suggesting that the Bible is full of evidence that the Almighty has picked a side—any side—in the debate over how (and whether) we should raise animals for food. We seem to remember something in the Bible about false prophets …