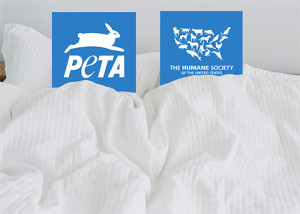 If you watch any of the ads from the Humane Society of the United States you likely think it’s related to all the local humane societies that care for pets—name confusion is how it raises millions of dollars a year. HSUS also likes to imply that it’s a mainstream animal welfare group that doesn’t work together with radical animal rights groups. Given how many staff members at HSUS come from PETA and other extremist elements, we know that’s not true. And emails from an ethics investigation is one more bit of evidence that HSUS works with fringe elements.

The emails come from a Congressional ethics investigation involving former Congressman Ed Whitfield and his wife, who is an HSUS lobbyist. Whitfield resigned last year after the investigation reprimanded Rep. Whitfield for giving his wife special privileges by allowing her to use his office’s resources to further HSUS’s lobbying.

The emails show that the Physicians Committee for Responsible Medicine (PCRM) asked HSUS for help in getting sponsors on a bill to ban the military from using animals to practice battlefield medical procedures, and received it:

“I’d be more than happy to help hook you up with our friends in [Sen.] Blumenthal’s office,” replied Jessica Feingold-Lieberson, then with HSUS. (She’s the daughter of former U.S. Sen. Russ Feingold, who lost last fall despite HSUS’s political arm spending a pretty penny on ads in his favor.) 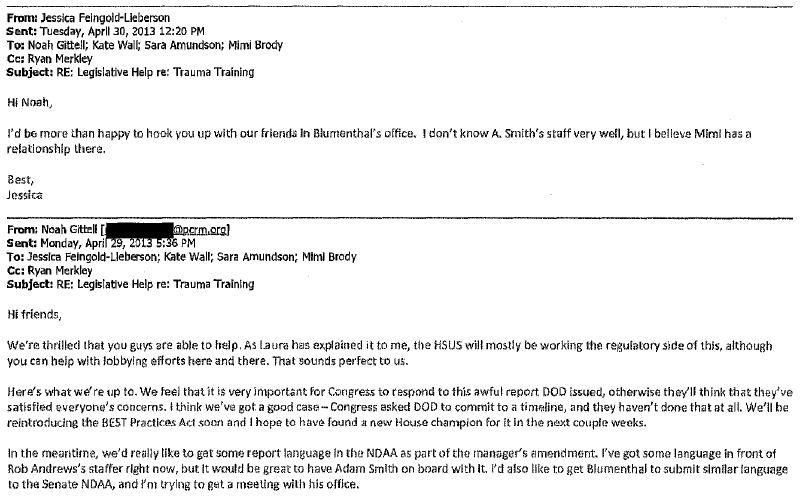 What is the “Physicians Committee for Responsible Medicine”? It’s a PETA-linked group that advocates for veganism while wearing white coats. PCRM has received funding from The PETA Foundation, and PCRM president Neal Barnard reportedly lived with PETA president Ingrid Newkirk. Barnard also “co-signed letters, on PCRM letterhead, with the leader of Stop Huntingdon Animal Cruelty, an animal-rights group the Department of Justice calls a ‘domestic terrorist threat,’” according to Newsweek, and has uttered such ridiculous proclamations as, “To give a child animal products is a form of child abuse.” (Kids who enjoy chocolate milk would disagree.)

The American Medical Association has previously called PCRM a “fringe organization” that uses “unethical tactics” and is “interested in perverting medical science.”

Last we heard, only around 10% of PCRM’s members were actually physicians. No surprise why: PCRM is notorious for campaigns comparing hot dogs to cigarettes. Its advocacy is as silly as PETA’s; even The Daily Show couldn’t resist making fun of PCRM a few years ago.

That’s probably why HSUS doesn’t publicly work with PCRM. But when it comes to fringe animal liberation groups, HSUS is all too happy to assist under the radar.