Oklahoma and the Rest of the HSUS Election Roundup - HumaneWatch 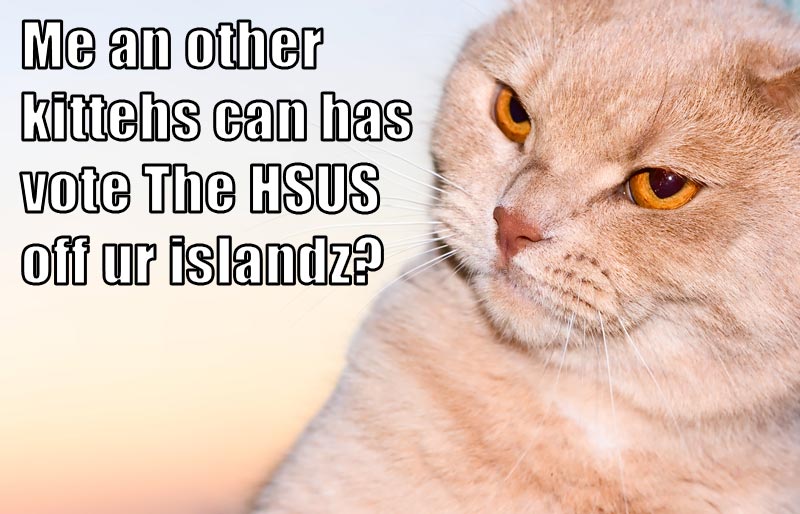 If you’re reading this, chances are you already know Election Day is tomorrow. And you're probably also hyper-aware that the “Humane Society” of the United States has a stake in oodles of outcomes, including the re-elections of four Members of Congress (1 | 2 | 3 | 4) and a U.S. Senator.

There’s been an insane amount of media coverage focused on four HSUS-related ballot questions—which isn’t really fair, since there are actually five biggies in play for Team HSUS out of the 160 state-level questions on tomorrow’s ballots.

Easily half of the HSUS-related ballot stories out there have been about the animal rights group's favored ballot measure in Missouri. Most "animal people" also know HSUS is writing six-figure checks to influence outcomes in Arizona and North Dakota. And HSUS is also backing a Proposition in California this year.

Here are those first four ballot questions, the ones most HumaneWatchers are already familiar with:

And then there’s Oklahoma. For those of you non-Sooners out there, these poor schlubs are going to be facing eleven separate ballot questions tomorrow—more than voters in any other state. (Voting? Pack a lunch.) So it would be easy to let little ol’ “State Question 750” slip through the cracks.

SQ 750 would amend the Oklahoma Constitution to change the number of signatures that it takes to get an initiative or legislative referendum on the ballot. Currently, it’s a percentage of Oklahomans who voted in the last general election. But this new proposal would tie that percentage to vote totals from the last governor’s race.

The present system in Oklahoma is subject to some upswings and downswings, since more people tend to show up to vote during Presidential election years. Oklahoma’s governors, however, are only elected in mid-term election years. So SQ 750 would effectively fix the signature requirements at the low end of the current scale.

Which would be very good news for the Humane Society of the United States.

Making animal agriculture more expensive is among Wayne Pacelle's top goals, but getting an animal-rights proposal on the ballot in Oklahoma—a big cattle ranching and pork farming state—is a steep climb. This measure would make it a whole lot easier.

So why hasn’t Pacelle been beating the bushes for Question 750 in Tulsa, Stillwater, and OKC? Probably because hard-crusading vegans aren't exactly welcome in most parts of the state. And while August polling showed the “No” votes just five points ahead, that number ballooned to 20 percentage points by mid-October.

Still, monkeying with the requirements for putting a potential new law on the ballot would be a great way for HSUS to quietly sneak into the process via a back door. If Oklahoma SQ 750 should manage to pass, HSUS will probably claim victory. If not, don’t expect the animal rights group to utter a peep. Wayne doesn’t like backing losers. Not publicly, anyway.

No matter where you are tomorrow, or what your politics are, HumaneWatch urges you to VOTE! If you don’t vote, you don’t count.

Note: HumaneWatch is a project of a respected 501(c)(3) nonprofit organization that does not take positions for or against political candidates, and errs on the side of caution by not making “Yes” or “No” recommendations on ballot measures. This is not an endorsement of any particular candidate or ballot-issue campaign.