Scoring the Election from the Middle of Nowhere - HumaneWatch 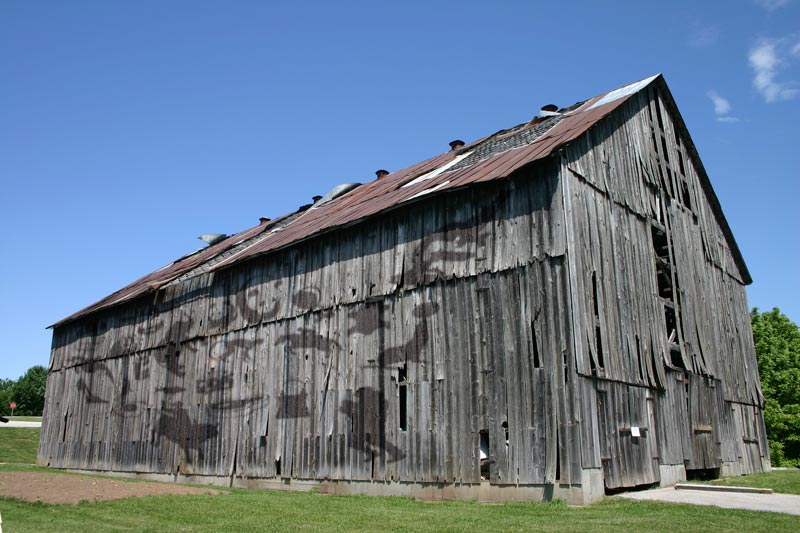 In yesterday’s national elections, the Humane Society of the United States got some of the best political outcomes its donors’ money could buy. The animal rights organization first burst onto the national political scene with the Wall Street Journal’s observation that it outspent Exxon Mobil and Halliburton in the 2006 elections. And this year, Wayne Pacelle’s PETA-plus-sophistication brand of campaigning kept up that trend.

The news wasn’t all good for Wayne and Company. HSUS’s endorsement of Ohio Governor Ted Strickland was for naught, and a handful of ballot measures it opposed won easy passage. But as you might expect, all eyes were on Missouri last night as the so-called “puppy mill” vote totals came in.

In the end, Missouri “Proposition B” passed narrowly, and the 3-percent margin is the closest squeaker HSUS has ever seen. That may very well be the first real story to emerge.  We wonder if anyone in the media will tell it. 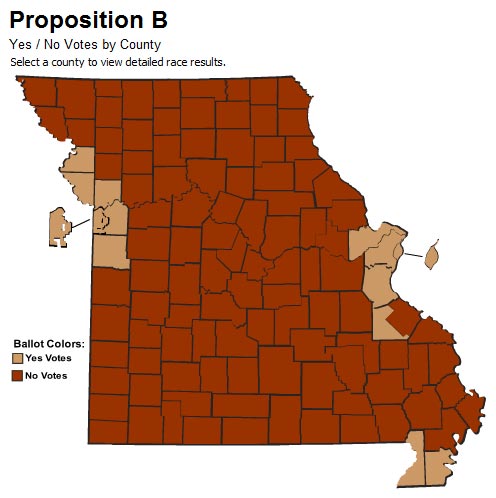 What you’re looking is an amazing view of the urban-rural divide that the animal rights movement is so good at creating, fostering, and exacerbating. On the left is Kansas City. On the right are the city of St. Louis and the wealthy St. Charles and St. Louis Counties. At the bottom (in the bootheel) are Dunklin and Pemiscot Counties, the closest areas to HSUS’s relatively strong Tennessee political operation.

Put simply, from a geographic standpoint most of Missouri rejected HSUS’s agenda—including practically everyone directly affected by it. It was a centralized urban base, largely removed from the realities of life away from their concrete jungles, that delivered a victory for HSUS.

We can’t imagine a better illustration of the problem that HSUS has created and leveraged by professionalizing the cottage industry of animal-related conflict. And it may just be a matter of time before farmers, ranchers, and (yes) dog breeders throw up their hands and “shrug.” We’re already hearing from some of them; and in the harsh light of another defeat at HSUS’s hands, leaving urbanites to fend for themselves (and feed themselves!) seems less and less like a crazy proposition.

At best, of course, HSUS’s “puppy mill” victory—like its pyrrhic “battery cage eggs” victory two years ago in California—will change very little other than the geography of an industry. When egg farmers can move to Nevada (or Mexico) to avoid paying for Californians’ naiveté, why shouldn’t they?

The same may yet be true of Missouri’s dog breeders. Time will tell, but the economic development plans of a half dozen states adjacent to Missouri just got major boosts courtesy of Wayne Pacelle. Iowa? Arkansas? Kansas? time to dust off those Welcome mats.

For Missouri farmers, though, questions remain. Will HSUS use yesterday’s well-laid groundwork to come after them in short order, as most thinking people believe is inevitable? And if so, will the people who put food on America’s tables be ready?

Missouri city-dwellers have a lot of learning to do—about where their food comes from, and about HSUS’s ulterior motives. Someone has to assume the role of teacher. We can handle the latter role, but it’s going to be up to the dirt-under-the-fingernails demographic to undo the damage done by HSUS’s sophisticated propaganda machine.