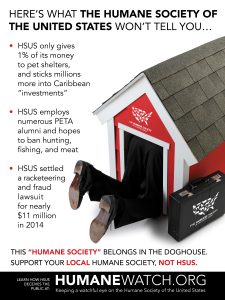 With the Humane Society of the United States (HSUS) pushing its legislative agenda on Capitol Hill, we decided it was time to release another ad highlighting some of the group’s worst actions. This time, we focused on targeting legislators and staffers by placing it in Politico.

HSUS recently began pushing its radical agenda by overtly lobbying Republican lawmakers and staffers. By sending a delegation of “conservative” staff members to CPAC and by placing op-eds in Washington papers from a “conservative” employee—not to mention a column from one employee’s mother—HSUS has tried to normalize its repugnant brand of animal justice by making palatable arguments for animal welfare without mention of its overall goal to drastically reduce, and ultimately eliminate, all farm animals and pets.

Parties on both sides of the aisle should reject HSUS.