Given that six Congressmen recently wrote to the IRS Inspector General demanding a federal investigation of the Humane Society of the U.S. (not affiliated with local humane societies), we and many others are hopeful that HSUS is getting due scrutiny. But if an investigation is underway, it apparently wouldn’t be the first time the IRS has taken a closer look at 2100 L Street.

According to Animal People, in 2001 the IRS probed the alleged self-dealings of HSUS General Counsel Roger Kindler and HSUS senior counsel Murdaugh Madden, who had formerly been HSUS’s General Counsel for 32 years.

The IRS probe stemmed from a complaint filed by the former secretary for Kindler and Madden’s office at HSUS. This woman, Nancy Dayton, believed that the two were using HSUS’s resources for their own gain in offering private legal services out of HSUS’s headquarters. According to Animal People, Kindler and Madden advertised on the website lawyers.com that they handled wills, trusts, and other matters and listed HSUS’s headquarters as their address. They were apparently acting on their own time, yet allegedly used “HSUS premises, personnel, and equipment” in a significant manner for their for-profit law firm.

Dayton allegedly relayed her concerns to then HSUS President Paul Irwin in August 2000, only to be fired by Irwin a couple of weeks later. So in early 2001, Dayton filed a complaint with the IRS, which in March told her it had assigned an investigator to her allegations.

Specifically, Dayton charged that Kindler “assigned work on the following projects unrelated to the Humane Society of the United States’ chartable mission and on behalf of individuals with no relationship to the HSUS charitable mission.” For instance, she alleged that Kindler helped a friend get out of an $87 debt to a music club, along with using HSUS resources for personal gain.

All this certainly seems shady, but we presume that the IRS didn’t find any wrongdoing since Kindler is still employed by HSUS. It’s still a fascinating story nonetheless. It would certainly fit into the history of questionable financial dealings at HSUS—from its major scandal in the 1980s involving executive housing and compensation to grabbing $1 million from the Humane Society of Canada (which drew harsh words from a Canadian judge).

Click on the image below to read a scan of the full piece from the April 2001 Animal People (not available online that we could find). 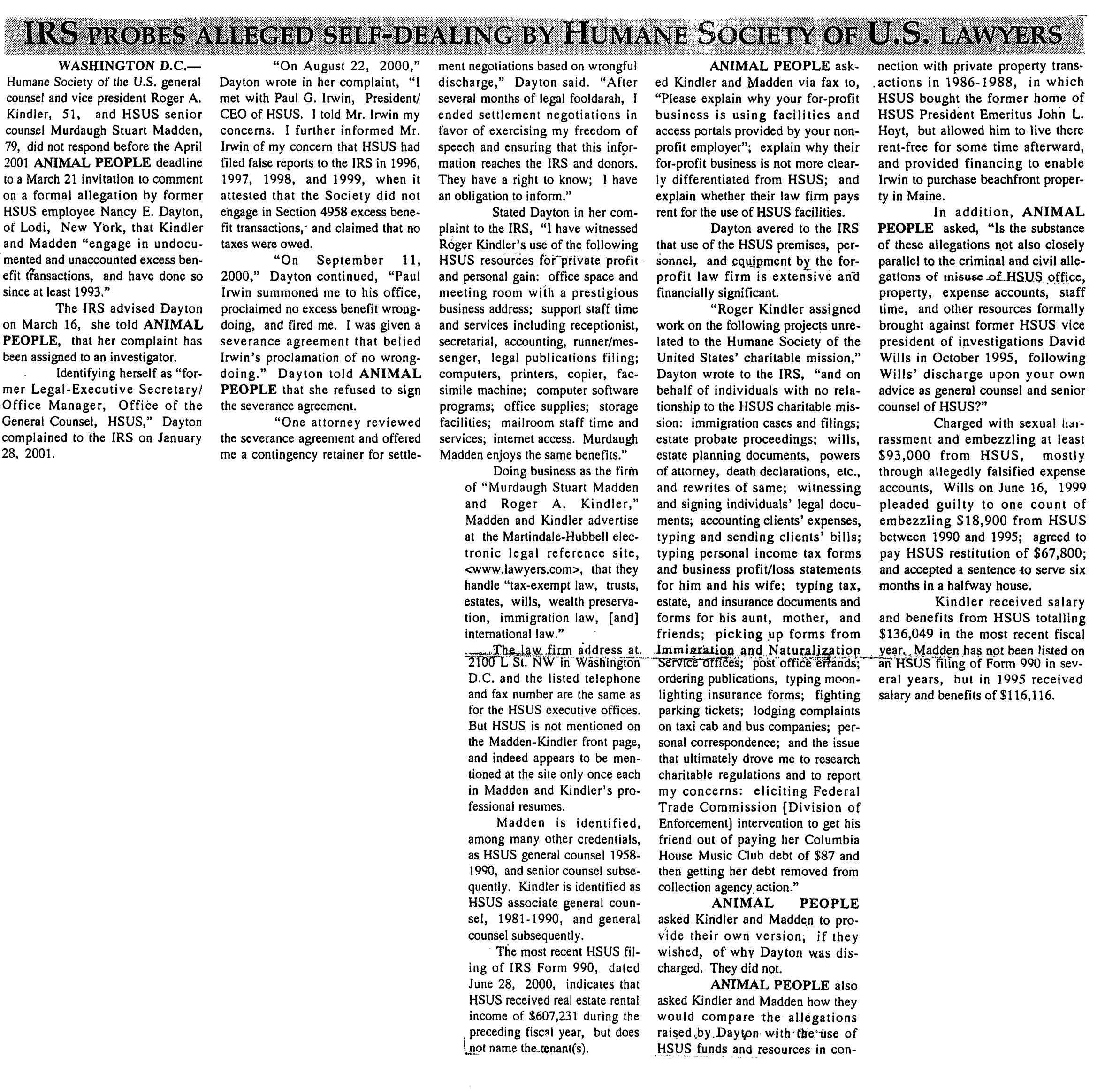