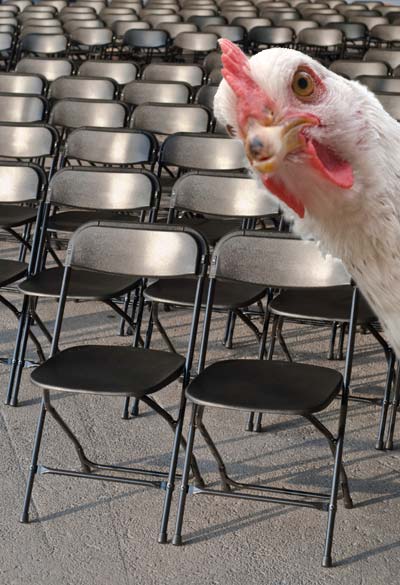 The November elections are over, so the Humane Society of the United States has gone back to its most reliable bread-and-fake-butter issue: attacking egg farmers. Today HSUS released carefully selected video images from an “undercover investigation” of an egg farm in Texas, alleging (of course) inhumane treatment of chickens.

Yesterday, HSUS’s media department put out a nationwide alert about its press conference, which happened this morning at 11:00 EST.

You’d think the media would have lined up outside 2100 L Street in Washington to hear the Great Vegan speak. You’d think the conference call service would be jammed with eager reporters. You'd think they would engage Pacelle for an hour or so on the intricacies of animal protection.

We were on the call, but apparently hardly anyone else was. A grand total of three people—two in the room and one on the phone—asked questions. And they focused on pocketbook issues, not chickens.

Is the media getting “issue fatigue” from HSUS holding too many dog-and-pony chicken-and-egg shows? And in an age of slumping economies and other more pressing matters, do reporters really care about HSUS's flavor-of-the-month campaigns anymore?

The call—which lasted almost an hour—featured Wayne Pacelle and his favorite vegan doc, Michael Greger, stemwinding on and on about how egg producers need to go “cage-free” and egg retails need to force them to do it. Nothing new there. Greger tried to link salmonella risks to birds in cages, and fudged the numbers doing it. Again. There was also a speaker from the National Consumers League at the press conference, trying to persuade reporters that cage-free egg production is “not just an animal rights issue.”

We could almost hear Pacelle cringing through the phone line at her honest choice of words. (It’s “animal protection,” not animal rights. Apparently, she missed the memo.)

Again, there were only three reporters who seemed interested enough to chime in, and none was about animal cruelty or HSUS’s shock video. The most persistent line of questioning came from a USA TODAY Editorial Board member who challenged Pacelle on just how much more expensive his preferred “cage-free” eggs would be for consumers. Pacelle, predictably, ducked and evaded, but she was having none of it, eventually saying flat-out that she’s seen cage-free eggs costing “twice as much or more” than the regular kind.

This is the elephant in the living room, of course. While Pacelle and Greger boasted today that there are European countries (they mentioned Germany and Austria) where eggs from caged hens simply aren’t sold anymore, they never explored how many Euros consumers in those countries shell out for their Hühnereier.

News flash: A dozen eggs in Germany and Austria can typically cost more than $6.00 (US), more than three times the typical American price. (Of course, you can’t actually buy eggs by the dozen there anymore, but that’s another subject.)

So here’s the bottom line: HSUS seems to be getting more politically tone-deaf, advocating for higher food prices at a time of economic uncertainty. It’s no wonder, then, that reporters are rolling their collective eyes as they come to grips with where HSUS’s priorities are.

We’ve always held that cage-free eggs are a fine choice for people who can afford them. The marketplace should provide a wide variety of choices for everyone—and yes, that includes tofu and vegan “egg substitutes.” It should also include low-cost eggs, dairy foods, and meat for consumers struggling to make ends meet. With his $269,000 salary package, it’s understandable that Wayne Pacelle isn’t exactly tuned in to what ordinary people experience when they do their grocery shopping. (That, too, is a subject for another time.)

Pacelle noted during today’s press conference that cage-free eggs make up only about 5 percent of the marketplace. He wants it at 100 percent. Americans don’t appear too eager to agree, and now reporters seem disinterested entirely.