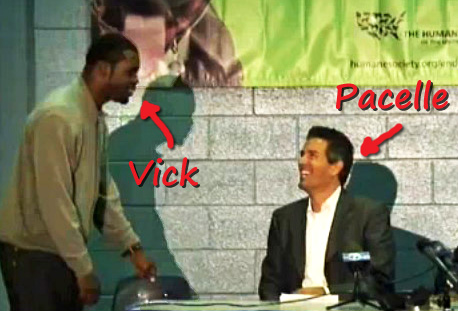 Yesterday, we saw something that doesn’t happen very often. It’s more than HSUS CEO Wayne Pacelle just telling reporters that he thinks Vick “would do a good job as a pet owner.” Pacelle, who tries so desperately (and often successfully) to hide the fact that his moral compass is far outside the mainstream, slipped up and told the truth. And Americans—including countless animal lovers who are accustomed to siding with HSUS—reacted with visceral anger and disgust.

It took Pacelle less than 18 hours to begin backtracking. (Donors are upset, after all.) On his blog this morning, he (or his ghost-writer) attempted to perform major damage-control. Wayne now says “it could be a good thing for Michael Vick’s family to have a pet.”

But that’s not what he said yesterday. Wayne told the Atlanta Journal-Constitution that Vick (not Vick’s family­) “would do a good job as a pet owner.” He wasn’t misquoted. He is, however, trying to diminish the significance of his gaffe by claiming the newspaper asked him a “simple ‘yes-no’ question.” (There’s nothing unusual, of course, about reporters asking simple yes-no questions. What’s unusual is that Pacelle answered one.)

Will Wayne’s blog be enough to quell the firestorm? Time will tell. But it yesterday’s reactions on Facebook (HSUS’s Facebook page, not ours) are any indication, HSUS members will be barking mad at Pacelle for a long, long time.

These are actual quotes from HSUS’s Facebook wall. We’ve removed last names out of respect for the commenters’ privacy: