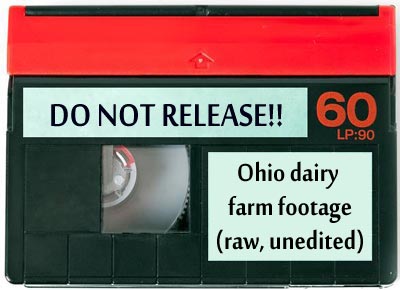 Here’s some interesting news: After hearing days and days' worth of evidence, an Ohio Grand Jury has refused to indict Gary Conklin for any criminal wrongdoing. Conklin owns Conklin Dairy Farm, the site of an undercover “sting” operation by the animal rights group Mercy for Animals (MFA) this spring.

The Humane Society of the United States promoted the resulting video footage, which was heavily edited and creatively spliced together. And HSUS was widely expected to make the video's image the centerpiece of its political campaign this fall. (Of course, that won't happen now…)

But prosecutor David Phillips told the Associated Press that jurors “saw the unedited video of Mr. Conklin's actions, not the highly inflammatory version released on YouTube" (emphasis added). And four veterinarians with experience in farm animal care also reviewed that (raw) version with the Grand Jurors.

Phillips determined that what Conklin did was appropriate because he was trying to help a downed cow get up. Had he not, the cow would have died. Phillips remarked: “What [MFA] did is they edited that into the middle of Billy Joe Gregg and his abuse. It creates a perception that Mr. Conklin knew or participated in this.”

The Grand Jury also determined that the MFA filmmaker won't face any criminal charges. Why did this even come up? Because the filmmaker admitted to poking animals with a pitchfork to “maintain his cover.” So the animal rights activist on the scene not only filmed sickening animal abuse for a month before reporting what he saw, but he also took part in it personally.

Meanwhile, MFA still claims that it was the “only true watchdog and defender the animals at Conklin Dairy Farm had.” Right.

Here’s the moral of the story: Spliced video is one thing (and that’s not to downplay in any way some of what was shown), but much like that 2008 HSUS "undercover" video from New Mexico, sometimes it takes a while for the whole picture to get out. And it's best not to let animal rights partisans interpret their own cherry-picked "evidence" for us.