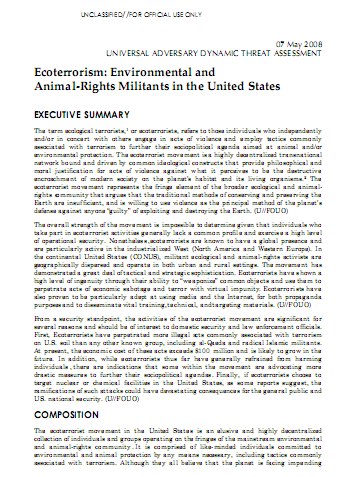 Ecoterrorism: Environmental and Animal-Rights Militants in the United States

In this report, marked “UNCLASSIFIED // FOR OFFICIAL USE ONLY,” the U.S. Department of Homeland Security writes (page 9):

UPDATE (18-Feb-2010): HSUS’s attorneys inform me that this report has been withdrawn and re-written by DHS, and no longer includes references to either HSUS or the Fund for Animals. Click here to read a letter from the Federal Emergency Management Agency to HSUS about this.