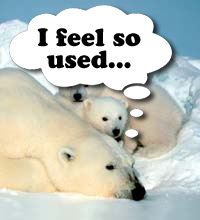 HSUS shares less than 0.5 percent of its money with pet shelters. What does it do with the other 99.5 percent? A big part of it involves constant lobbying.

In an “action alert” issued late yesterday, HSUS asked its followers to pressure their U.S. Senators to oppose a bill by Sen. Lisa Murkowski (R-AK) that would have restricted the EPA’s ability to regulate certain greenhouse gases. (The bill was ultimately defeated, and HSUS has since replaced its "action alert" online with a victory lap.)

But why is an animal group weighing in on global warming?

HumaneWatch doesn't take a position on climate change, global warming, or whatever you want to call it. But we think it's fair to look at why HSUS is choosing sides. The group's stated reason is that climate change "poses a huge threat to wildlife, pets, and all other animals."

We're not buying it. HSUS's sudden concern for greenhouse gases has nothing to do with the polar bear pictured on its "action alert," and everything to do with hamstringing livestock farmers.

Last September HSUS filed a petition with the EPA (along with Robert F. Kennedy Jr.'s Waterkeeper Alliance, Friends of the Earth, and a gaggle of other green groups), asking the agency to regulate emissions from livestock under the Clean Air Act. The EPA took a big step in that direction in December when it ruled that carbon dioxide should be a regulated greenhouse gas.

And about two weeks ago, the EPA settled a similar environmental lawsuit, agreeing to start monitoring animal waste from farms under the Clean Water Act.

After the Clean Water Act, the Clean Air Act is the next step for activists looking to make it more difficult to raise animals for food. And now it appears the EPA will be moving forward in that regard. Skeptical that this is HSUS's end goal? Just look at the group's actions in New York, where it sued a duck farm over water pollution (after suing the Empire State to stop a grant that would have improved the farm's waste-handling system).

Play the tape forward: As soon as HSUS can start suing Farmer John over cow burps, well, expect its 30 lawyers to kick into gear.

In other words, this isn’t about saving polar bears. It’s about regulating cow farts (and manure) in order to put a costly new burden on farmers (those who don't produce tofu, anyway).

Plenty of skeptical HSUS members challenged the group yesterday—on its own Facebook wall, of all places—about its odd foray into the politically nuclear world of climate politics. Here’s what a few of them wrote:

Ultimately, HSUS’s motto of stopping cruelty to animals “wherever it occurs” is nebulous enough to mean whatever the group's lobbyists want it to mean. And if you don't like its definition today, just wait 'til tomorrow.

Climate change isn't the only area of "mission creep" that seems to have HSUS issuing policy statements (and raising money). Last year the group's Humane Society Legislative Fund arm ranked U.S. Congressmen on whether they opposed a proposal to allow people to carry guns for defense in national parks. I’m not trying to start a Second Amendment debate here, but why is an animal rights group spending time on this?

HSLF’s official rationale is that guns in parks might increase "poaching." Well … guns have also been known to lead to sport hunting (a big HSUS no-no). We suppose allowing people to have steak knives in restaurants might lead to meat eating, so we can expect HSUS to start lobbying against that too.

Where does it end? With a $100 million budget, it probably doesn't.