If you find the Humane Society of the United States’s official position on eating meat confusing, you’re not alone.

HSUS preaches the virtues of “reducing [meat] consumption,” but it has generally tried to avoid looking like PETA—until now.

Recently a small group of doctors gathered outside the White House in their lab coats (always a nice photo-op prop)  to promote a vegan alternative to the USDA’s Food Pyramid.

The event was organized by the PETA-linked Physicians Committee for Responsible Medicine (PCRM, not a mainstream health organization), but HSUS’s Dr. Michael Greger participated in the official press-release photo (at far left). 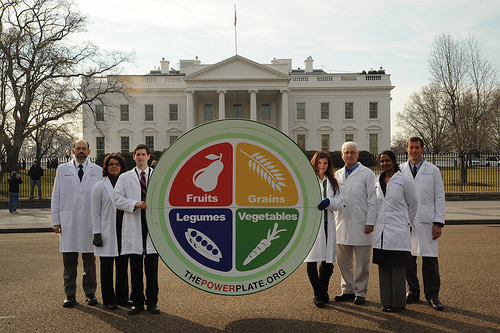 HSUS’s party line back in 1990 was “We are not a vegetarian organization.” Times sure have changed.

If HSUS isn’t a full-on vegan advocacy group now, why is its “Director of Public Health and Animal Agriculture” joining an effort to replace a balanced diet with meatless eating?

The next time HSUS tries to deflect charges that it’s basically PETA in disguise, it would be completely fair for a reporter to pull out this photograph and ask for an explanation.

Update: An hour or two after this photo was taken, the same stunt was repeated in front of the U.S. Department of Agriculture. Greger was missing from that photo-op. Maybe someone reminded him that HSUS and PETA aren't supposed to publicly cross-pollinate.