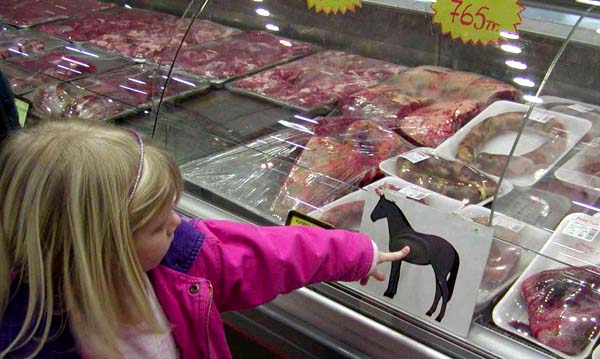 In 2007, the Humane Society of the United States got a federal law passed that prohibits the U.S. Department of Agriculture from spending tax dollars to inspect horse meat. So although there’s nothing illegal about slaughtering horses for human consumption, the practice is halted as a practical matter. HSUS couldn’t be happier with that, of course.

Has the result been good for horses? The answer isn't as obvious as you think.

Unwanted horses are as much a part of life as unwanted dogs and cats, but the economics of the situation are a bit different. For starters, eating dogs and cats is pretty uncommon in the Western world, while horse meat can be found in most European and Canadian grocery stores (and all over Japan).

Sadly, Americans euthanize millions of “surplus” (we hate that term) pets every year, and no dog owner expects to “sell” his or her animal at the end of its life. On the contrary, euthanizing a family pet costs money. Most horse owners, however (especially in the American West), consider the animals to be livestock. Until a few years ago, a horse would actually bring a price when it was time to “put it down,” because there was a commercial market for the animal’s meat.

But no more, thanks to HSUS. The animal rights group doesn’t seem to have a problem with euthanizing horses, but it continues to oppose processing them for meat. This has created a cash crunch for horse owners all over America. And human nature being what it is, the end result is a lot of unwanted horses being turned loose to fend for themselves—or worse. 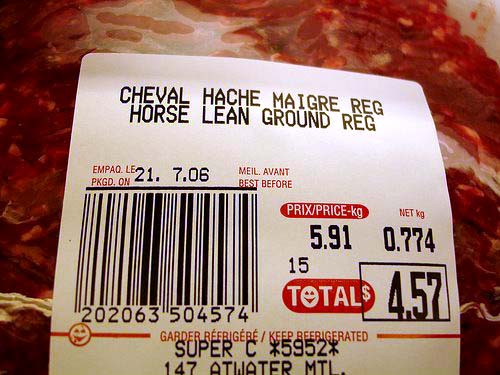 We noted recently how HSUS got served by scientists at the National Oceanic and Atmospheric Administration. Now it looks like a group of college students is also giving the group a much-needed dose of reality.

A team of graduate and undergrad students at University of Utah Utah State University analyzed what happened to the horse industry after HSUS effected the end of domestic horse slaughter. Writing in 2008, they found a host of unintended consequences in just the first year of the new status quo. It’s an interesting and fairly quick read.

The arguments against horse slaughter essentially boil down to four points, in the words of the authors:

Time for a reality check

The “cruel and inhumane” premise is simply wrong: The American Veterinary Medical Association lists three acceptable methods of euthanasia for horses, including the same methods used by horsemeat processors. And suggesting that “Americans do not eat horse meat” ignores what appears to be a thriving underground black market. (Americans eat plenty of it. They just don’t buy it at Whole Foods.)

And in the “unintended consequences” category, horse abandonment increased following the slaughter ban. According to the Utah paper, many horse owners don’t have the financial resources to pay a vet for euthanasia services. It’s much easier (if less responsible) to just turn the horses out into the wild.

Even HSUS began acknowledging in 2008 that rescue organizations are taking in more unwanted horses than ever.

Some horse owners don’t abandon their animals, of course. Many simply transport the animals to Mexico for slaughter, where standards of humane treatment—to say nothing of food safety—are far less stringent.

But HSUS has a fix for this. Sort of.

The group’s new solution is a sweeping ban on transporting horses out of the country for slaughter. And it doesn’t take a crystal ball to see where this is headed. More unwanted horses will be abandoned to greater suffering. (Any chance HSUS will pony up some of its $192 million nest egg to take care of these unwanted animals? It’s doubtful.)

It seems the more HSUS gets involved in the horse slaughter issue, the worse things get for horses. Here’s what the Utah researchers conclude (emphasis added):

The promoters of banning the ethical harvest of horses have played on the emotions of public servants and private individuals who are not only not horse owners themselves, but have reacted and made government and state policy based on emotion with no concern for the reality of the implications of the ban.

In other words, HSUS’s ideologically driven equine activism wasn’t terribly practical. It didn’t actually solve any problems. If anything, it created new ones. That’s what usually happens when dogma (or in this case, horsema) tries to trump reality and economics with blinders on.