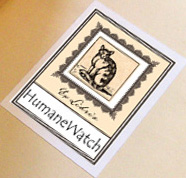 We've always thought the most important feature of HumaneWatch is our ability to offer primary-source documents to support what we write. Many of those have been documents that HSUS itself published. But in some cases they’re internal documents and memos that whistleblowers leaked to us.

Last week we completed a significant upgrade to our document library. And today we’re announcing some new entries. We recently acquired copies of HSUS’s federal income tax return from 1993 and 1994, and its consolidated financial statements for both years. It was a much smaller HSUS back then, and under different leadership too. But these early documents cover the years before and after current HSUS president Wayne Pacelle was hired, so they're important.

Have at 'em, let us know if you see anything of note, and by all means keep the documents coming. We couldn't be doing all of this without you.