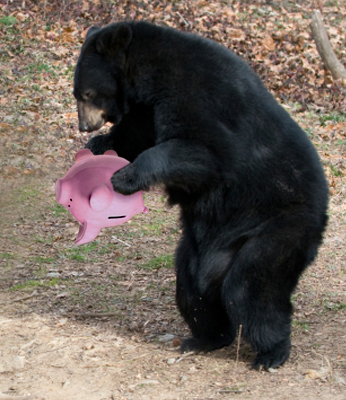 The Humane Society of the United States employs plenty of tricks to grease its fundraising machine, and “crying wolf” looks to be the newest one utilized. You already know how HSUS uses pictures of cats, dogs, kitties, and puppies in its ubiquitous TV ads, projecting the image that it runs a pet shelter (or that it’s a pet shelter “umbrella group”). HSUS, of course, doesn’t run any pet shelters and barely gives any money to them.

But now in addition to household pets, HSUS is using endangered species as fundraising props.

Since the 1973 passage of the Endangered Species Act, the populations of 21 species have recovered enough to be “delisted.” Each one represents a remarkable turnaround.

In addition to the federal government’s list, many states have their own species-protection programs with their own procedures for publicly rejoicing when a formerly endangered species rebounds back to normal. Florida‘s Fish and Wildlife Conservation Commission, for instance, moved to delist some species on Wednesday— including the black bear.

This move is not without its detractors. One of the loudest is HSUS. While the Commission’s chairman seems to be most interested in recognizing environmental success stories, HSUS doesn’t seem eager to embrace victory.

HSUS’s state director already has an op-ed in the Miami Herald warning against bear hunts. And the Sun-Sentinel reports:

”Florida's blackbears [sic] have only recently begun to recover from near extinction, and they still face serious threats from habitat loss and fragmentation,” states an email alert sent out by the Humane Society of the United States”.

Why the ruckus? The fact that the black bear population has grown in Florida to the point where hunting is even being considered—whether or not it’s ultimately adopted—is cause to pop a champagne cork. The same is true for the other 15 species that Florida may delist. The Commission states that the black bear population has been increasing for 24 years and is currently at a sustainable level.

We think any animal protection group worth its salt should be celebrating, not complaining. HSUS can’t take “yes” for an answer, indicating an odd (but predictable) organizational dysfunction.

Consider this analogy: The March of Dimes began in 1938 as a group solely focused on combating polio. After the polio vaccine arrived in the 1950s, the group didn’t close its doors. It reinvented itself as an organization fighting birth defects.

Similarly, although populations of formerly endangered species are becoming stronger, HSUS’s “wildlife” division still has to find a way to raise money. “Everything is getting better” isn’t a good fundraising message. There must be a crisis. And raising the specter of hunting is as easy a strategy as any for keeping checkbooks open.

This script plays itself out on the federal level, too. Some states are asking for permission to delist the grey wolf and manage local populations through hunting. But HSUS and other environmental groups have been embroiled in lawsuits seeking to keep the grey wolf on the Endangered Species list.

Again, wildlife experts ought to be high-fiving over the rapid recovery of the grey wolf. And many of them are. HSUS, on the other hand, is beating the drum of impending doom for the wolves (with a convenient “donate” button at the top of the page). As for black bears, every below-the-fold story in a recent HSUS alert takes readers to an HSUS page with “DONATE” at the top.

What does HSUS prioritize first: Fundraising, endangered species, or an anti-hunting agenda? It’s a fair question.