One of the first things we did when HumaneWatch was launched last February was figure out what the Humane Society of the United States was doing with the nine-figure collection plate it passes every year. We were surprised to learn that according to HSUS’s publicly available tax return for 2008 (the most recent year for which data was available at the time), HSUS devoted less than one-half of one percent of its budget to directly funding hands-on pet shelters. 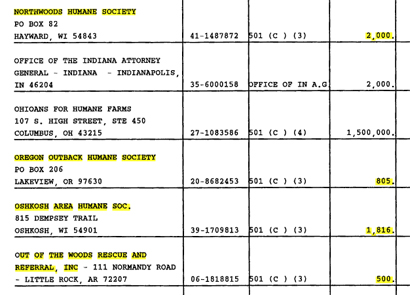 Now, however, HSUS’s 2009 tax return is also a matter of public record. HSUS ponied up a little bit more that year for local pet rescues and shelters, but it’s hardly worth shouting about. In all, HSUS shared less than 0.8 percent of its money with pet shelters in 2009. Some of those shelters share the “humane society” name with their richer (distant) cousin, but the vast majority of pet shelters in the United States received nothing.

We examined every outgoing grant HSUS reported making in 2009, and made a determination about whether or not the recipient was a hands-on pet shelter. Here are the numbers:

So only four-fifths of one percent (0.80%) of the money HSUS collected in 2009—much of it in response to TV ads that begged for money to “save” dogs and cats—actually went to the community-based organizations doing that work. (HSUS runs a handful of “animal care centers,” but no dog or cat shelters and no pet adoption programs.)

It’s also interesting to note that HSUS did give away over five percent of its budget in 2009. But less than 15 percent of what the group distributed made it to a hands-on shelter organization. Much of the rest went to subsidize the previously “insolvent” Humane Society International ($2.75 million), and to run political ballot initiative campaigns, including those in Missouri ($450,000) and Ohio ($1.5 million).

HSUS does deserve credit for a single grant of $284,625 for the construction of a new pet shelter in Louisiana’s St. Bernard Parish. But that grant accounts for 30 percent of all its shelter giving for the year, and sadly, this sort of giving is the exception, not the rule.

We’ve posted HSUS’s accounting of its 2009 outgoing grants—with the shelter grants highlighted—so everyone can see our math. Feel free to quibble in the comments section below.

One final word about our criteria: We gave HSUS credit for subsidizing a few horse and rabbit rescues in addition to the dog and cat shelters. But we left out grants to “spay/neuter” organizations and private veterinary practices that fund pet sterilizations without running their own pet shelters. (Had we included them, the proportion of HSUS’s money going where it should still wouldn’t have topped 1 percent.)

It will surprise many of you to learn that the Humane Society of the United States isn’t primarily in the business of funding humane societies. HSUS has historically considered these “societies” to be part of its “constituency,” but it’s not funding them with any sense of urgency. And in the meantime, HSUS’s $191 million endowment (part of which is invested in the stock market) continues to earn money hand over fist.

For what, you ask?

That’s an excellent question. The 6 to 8 million dogs and cats entering shelters this year (according to HSUS’s own estimate), and the people who care for them—and sometimes have to euthanize them for lack of space and funding—are entitled to an answer.