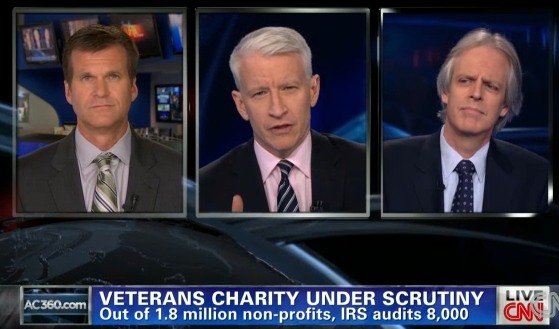 We wrote recently about the case of Disabled Veterans National Foundation after CNN reported that almost all of the money raised by this veterans charity wasn’t actually going to veterans, but to a for-profit fundraising firm named Quadriga Art and its subsidiary. Interestingly, the Humane Society of the U.S. has also been a recent Quadriga client, paying the firm nearly $20 million in 2009 and 2010. (We don’t have the 2011 tax return yet.)

Now, CNN reports that the U.S. Senate Finance Committee, led by Sen. Max Baucus of Montana and Sen. Richard Burr of North Carolina, will investigate DVNF and its fundraising activities. DVNF has reportedly raised $55.9 million since 2007, yet paid Quadriga more than $60 million between 2008 and 2010.

I don’t want retired schoolteachers or any good American to be duped by fraudulent organizations giving money thinking it’s going to go to disabled vets when in fact it’s not at all, it’s going to pad the pockets of some scam artist.

One of the CNN investigators put it:

Behind these donations are Americans that really want to help veterans. That’s why it’s so disheartening. They’re opening up their wallets thinking they are doing good and putting money directly into the hands of a for-profit company that’s making a killing off this.

Replace “veterans” with “dogs and cats,” and that sounds like a perfect fit for HSUS’s lucrative little scam. HSUS’s situation doesn’t seem as egregious as DVNF’s, to be sure, but it still strikes us as extremely unethical. HSUS is enabling groups like Quadriga to stay afloat. Just as people think they’re supporting vets by giving to DVNF, people think by giving to HSUS they helping those abandoned and abused dogs and cats in HSUS’s ads. We know, because we’ve documented this sad state of affairs among HSUS’s own donors.

So while Senators are looking at standing up for veterans’ supporters, why don’t they help animal lovers, too?