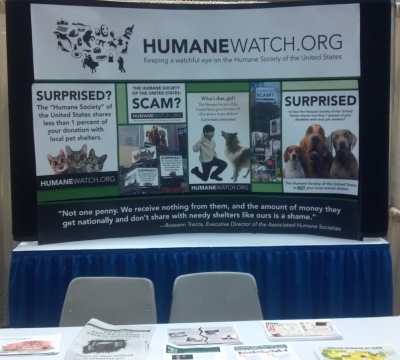 HumaneWatch was in sunny San Diego last weekend at the 2012 American Veterinary Medical Association (AVMA) Convention. We had an exhibit booth in the main hall along with a plethora of companies promoting products to a few thousand veterinarians who attended the event. And to stir things up a bit, a Humane Society of the United States group had a booth, too.

It didn't take long for our first visitor to stop by and say a kind word. It was an exhibitor, a few minutes before the hall opened on Saturday. He was from the veterinary technician field and said his company worked with a lot of hands-on local shelter, and was already "in the know" about the confusion between the Humane Society of the U.S. and local shelters and how little HSUS gives to shelters.

We figured it would be a fairly friendly crowd, but it definitely exceeded our expectations. There were a few poultry and large-animal vets or lab-animal scientists who already knew about HSUS (or fellow travelers like PETA and PCRM), but most of the attendees were small-animal vets. Many already knew about us or were already aware that HSUS gives little of the money it raises to pet shelters, but there were still quite a few vets and veterinary students who didn't know about HSUS, and we were happy to educate them.

No joke: we only heard two negative comments the whole weekend. And one of those came from a representative of the HSUS group, the Humane Society Veterinary Medical Association (HSVMA). She actually had the audacity to try to get us thrown out of the convention. Needless to say, she failed, but it goes to show how powerful our message is.

Frankly, it was bizarre to even see HSVMA there. Not only is it a competitor to the AVMA, but it is arguably trying to undermine the 149-year-old organization.

A little bit of background about HSVMA: It formed in 2008 after a combination of HSUS and the Association of Veterinarians for Animals Rights (AVAR).  Note that AVAR is an organization for animal rights—not animal welfare. (More on that in a moment.) AVAR was essentially the PETA arm of the veterinary movement. No surprise, then, that HSUS was interested in acquiring it.

The difference in culture was pretty easy to see at the convention. The AVMA's opening newsletter for Friday/Saturday included an article promoting SeaWorld and suggested food trucks such as "Bitchin' Burgers" and "Mr. Pig's BBQ." At the preceding weekend's annual conference for HSUS, however, there wasn't a morsel of cheese, egg, or meat to be found anywhere, and we doubt the HSVMA folks will be expensing any huevos rancheros from last weekend. 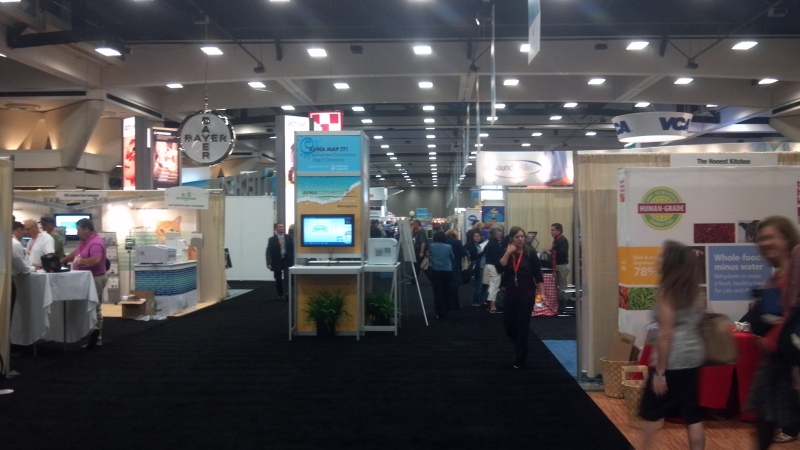 The meat of the matter is that veterinarians are supposed to be about animal welfare. Animal welfare is a science. You can measure stress in an animal, you can treat illness through medicine, etc. Animal rights, however, is not a science. It's a belief set that holds that using animals for human benefit is wrong.

This is directly opposed to the veterinary profession, both for large-animal and small-animal vets. The animal rights movement wants to abolish the use of animals for food, so that would eliminate the need for many large-animal vets. And the animal rights movement wants to reduce pet ownership, which would reduce the number of small-animal vets. (HSUS CEO Wayne Pacelle has said, "I don't want to see another cat or dog born," similar to PETA co-founder Ingrid Newkirk's stated wish to see pets "phased out.")

The AVMA and HSUS have come to occasional blows over issues such as horse slaughter. The disagreements spurred HSUS to start HSVMA, which is why it was odd to see a HSVMA booth at the AVMA Convention (we doubt HSUS would be so ecumenical). Wayne Pacelle has a few rants on his blog trashing the AVMA, making such wild-eyed claims that "it's standard for the AVMA to stand in the way of sensible reforms," "the organization typically takes unfriendly position on many of the major animal welfare question of the day," and AVMA is "part of the problem when it comes to the mistreatment of animals."

What a nice fellow that Pacelle is, smearing veterinarians.

It’s all a bit shrill given that the AVMA represents 80,000 veterinarians and has been around for nearly 150 years. And it's all a bit ironic given that Pacelle himself is not a veterinarian, nor is a single person in HSUS's executive staff. But it highlights the difference between the groups' philosophies–the AVMA takes realistic, evidence-based approaches, and Pacelle/HSUS take a scorched-earth, inflammatory, rhetorical approach to the issues.

Veterans of the debate know that animal rights arguments are often heavy on emotion and light on science. The veterinary field cannot survive if it's not science-based any more than neuroscience or biology can. But given that HSVMA is relegated to a booth and AVMA runs the show, we're optimistic for the future.