HSUS is a private organization, but thankfully its tax returns are required to be public. They give us a small glimpse into America’s most deceptive animal rights group. And we’ve just gotten a copy of HSUS’s latest tax return, covering 2010. (Past returns are in our Document Library.)

HSUS’s tax returns have served as a backbone for startling discoveries, such as that the organization gives less than one percent of its budget to pet shelters (the real humane societies); that HSUS puts more money into lobbying than it does pet-shelter grants; and that HSUS even contributes more to its pension plan than it gives to needy shelters.

So how did HSUS fare in 2010? Veteran readers won’t be surprised. Here are some low-lights:

Read those last two bullet points again: The “Humane Society” of the United States spends almost 90 times more on fundraising than it spends on pet-shelter grants. If that doesn’t show you the real priorities of this “factory fundraising” operation, nothing will.

In 2009, four-fifths of one percent of HSUS’s budget went to pet-shelter grants; this year is about half of that. It’s even worse than 2008. It may even be the lowest percentage ever.

Has HSUS no shame?

For the sake of openness, we’ve posted a copy of our accounting of HSUS’s grants. Feel free to quibble with us, but we’re confident of our accuracy. 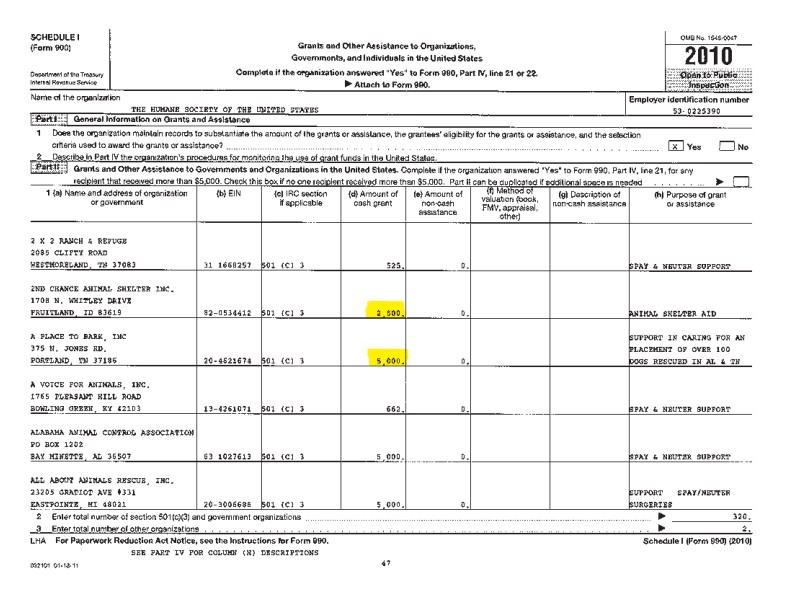 Helpfully, HSUS’s accountants listed the purpose of each grant. We counted grants that were labeled as “animal shelter aid” (or something similar). We included grants that HSUS made to shelters caring for rescued animals. And we also counted grants to care for horses, since there’s a huge horse welfare problem that HSUS helped create.

But despite the $528,676 of good that HSUS did, there’s a long way to go for HSUS to earn the “humane society” in its name. Memo to Wayne Pacelle: It’s time to stop feeding lobbyists and factory fundraising machines at the expense of needy pets.