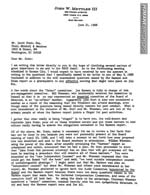 This file contains a 1988 letter to DC attorney Jacob Stein from John “Speedy” Mettler, who was then a Board Member of the Humane Society of the United States’ Board of Directors. Stein is a personal injury attorney. He is now a partner in the same law firm (now renamed) for which he worked in 1988.

This letter concerned a plan by the HSUS Board leadership to hire Stein (then the personal attorney of Board Chairman Bill Wiseman) to “investigate” some shady financial dealings between a “Deferred Compensation Committee” (a subset of the Board that was never legally empowered) and HSUS’s top two executives (Paul Irwin and John Hoyt). These matters had already been investigated by attorney Gail Harmon, and the Board already had her report.

In a previous letter to the HSUS Board’s Vice Chairman, Washington attorney Bardyl Tirana had already warned HSUS about the wisdom of hiring Stein to do a second review of the facts. Tirana thought Stein’s attorney-client relationship with Wiseman constituted a massive conflict of interest, and he feared that Stein’s report was only being sought as a pretext to sweep Harmon’s report under the rug:

William Wiseman, using the power of the chair, after soundly criticizing the “Harmon” report as unbalanced and unfair, announced that he had a plan. He then proceeded to state that “Jake Stein (his personal attorney) has an idea that will get everyone off the hook by starting a procedure that will resolve all of these matters.” You were described as the “new Independent Counsel” and Mr. Wiseman repeated that this would get the Board “off the hook” and said, “we need outside independent counsel of unchallengeable prestige.”

I might point out that Ms. Harmon was also an “independent counsel” but since Mr. Wiseman and others were incriminated in her report, Mr. Wiseman preferred to ignore both the Audit Committee (appointed by the Board) and the Harmon report because there were too many questions raised in the Harmon report that made him, the Deferred Compensation Committee, and some of the executive staff all look bad. So using the chair to his advantage. Chairman Wiseman appointed a “select” committee, stacked heavily with his own sympathetic directors, to try and bury the Harmon report once and for all …

As you should be well aware, the “Select” Committee was carefully designed by Chairman Wiseman to supersede, and in effect ignore the work done and report issued by the earlier Audit Committee and its attorney, Gail Harmon. (This committee incidentally was unanimously authorized by the Board of Directors in December, 1987). Is Chairman Wiseman, who is under such criticism for having aided and abetted the Hoyt-lrwin activities, really to be part of this “select” committee? Is John Hoyt to be part of it? Or are they simply included to be sure the Harmon report is effectively obliterated?