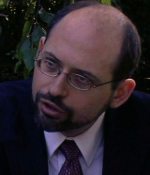 We're always looking for opportunities to see HSUS higher-ups in action. So when HSUS vegan nutrition specialist Michael Greger sat on a science panel this week, we dispatched our trusty research assistant to check it out. Here’s his report:

Hey, Humanewatchers! Glad to be able to share a story with you again. Hopefully my writing is at least as interesting as my fellow guest-blogger “Cheeta the research chimp.”

On Tuesday I attended an animal health / human health event co-hosted by CQ-Roll Call and the Animal Health Institute. HSUS doc Michael Greger was one of the panelists. Here in DC, you can't throw a cherry blossom without hitting a panel discussion, and they're usually boring as hell.

After I registered, I ran into Greger by the coffee. He recognized me immediately—after all, I’m that guy who was kicked out of his Humane Society “University” lecture by HSUS staff two months ago. We shook hands and exchanged brief pleasantries. (I resisted the temptation to ask about his guru the "Supreme Master" Ching Hai.)

Greger didn't disappoint. His presentation was 50 percent bluster and 50 percent bizarre leaps in logic. According to him, AIDS provides a rationale for why humans shouldn't eat meat: “Someone butchered a chimp a few decades ago and now 25 million people are dead [from HIV].” I'm not making this up.

Greger spent most of his time attacking the other panelists. (Very classy!)

He took shots at the “lobbying power” of the pork industry, conveniently forgetting that HSUS's own lobbyists outnumber those of many Fortune 500 companies. He tried to attack AVMA's DeHaven with meaningless bank-shots and out-of-context quotes.

Greger also accused the Iowa State vet of misinterpreting what happened after Denmark banned the use of antibiotics in animal feed in 1998. Here's the baseline result in language that even Greger can't "spin": It was horrible. Antibiotic resistance in humans has increased four-fold. Danish farmers had so many sick pigs on their hands that overall antibiotic use actually increased. Andthe World Health Organization found no evidence for improvements in public health.

Greger clearly could have made a better case. And if I had a chance to pose a question to the panel, it would be this: “If everyone from ‘the industry’ is instantly compromised in debates about animals, isn't someone from a factory fundraising group that rejects animal agriculture in the same boat?”