Is HSUS Against Fishing? - HumaneWatch 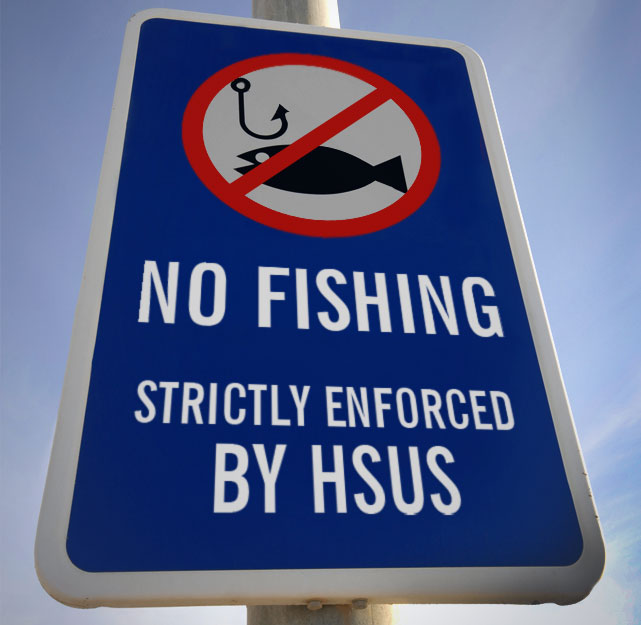 On the Alan Warren Outdoors radio show a few months back, Wayne Pacelle faced a battery of questions about whether HSUS wants to end fishing or ban hunting. Pacelle denied the charge, claiming that it wasn’t politically feasible and that HSUS is only against the “most abusive” forms of hunting and doesn’t have a campaign on fishing. (We had a few questions for him, but as soon as we came on he hung up. Maybe his favorite animal is the chicken.)

We’ve heard that “most abusive” line before. Consider Pacelle’s reasoning for not campaigning against fishing, from the 1994 book Bloodties:

Author: “About fishing … do you avoid campaigning against it because there isn’t a ground-swell movement in our culture to eliminate it?”
Pacelle: “That is correct. We’re out to minimize suffering wherever it can be done, and wherever our limited resources can be utilized most effectively—abusive forms of hunting for now, all hunting eventually.”
Author: “And fish aren’t furry and cute.”
Pacelle: “That’s right.”
Author: “How about pets, Wayne? Would you envision a future with no pets in the world?”
Pacelle: “I wouldn’t say that I envision that, no. If I had my personal view perhaps that might take hold. In fact, I don’t want to see another cat or dog born. It’s not something I strive for, though.

In 1997, after moving to HSUS, Pacelle continued the “we just want to end the most abusive practices” line. And he continues it. Pacelle says these days about farm animals: “[W]e have a moral obligation to … stop the most extreme forms of abuse. We’ve made a very pragmatic judgment that the American public is still, by and large, a meat-eating public.”

That doesn’t rule out HSUS being opposed to all animal farming. It’s just saying that HSUS has made a “very pragmatic judgment”—that is, public relations—to not openly espouse the vegan PETA philosophy. To use a football analogy, HSUS is willing to gain first downs instead of throwing the ball deep on every play like PETA does.

Try to find a form of hunting or fishing or animal agriculture that HSUS supports. You’ll have an easier time finding an ice cube in the Sahara. HSUS doesn’t support eating fish, game, or any other animal or animal product.

To answer the original question, HSUS would probably ban fishing if it could—something that is completely infeasible, at least in the present. But then again, who thought some fish would have lawyers?