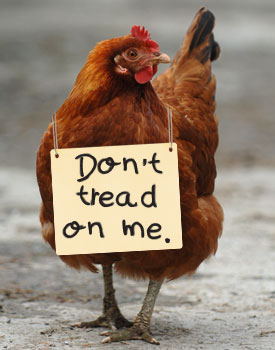 The Humane Society of the United States isn’t affiliated with any “humane societies” or other pet shelters in the United States. But HSUS occasionally teams up with state-level humane organizations to push political initiatives. (Examples: “Prop B” in Missouri, and HSUS’s “cage-free” egg initiatives in the states of Oregon and Washington.)

Recently, though, some of those political alliances have frayed.

The Missouri Humane Society recently broke with HSUS by endorsing a compromise brokered by Governor Jay Nixon that rolls back many of Prop B’s provisions.

And the Oregon Humane Society is allying itself with State Senate President Peter Courtney’s bill aimed at transitioning egg farmers to “enriched” cages, a space-increasing improvement which is approved by the American Humane Association. The end result is that HSUS has been left on the sidelines, clucking alone for “cage-free” laws.

Whatever touch HSUS had with local humane societies is eroding, in part because hands-on organizations understand that when the political dust has settled, HSUS and its out-of-state money will be long gone.

It’s entirely possible that Prop B (as written) would bring a doggie deluge to shelters, as breeders abandon their animals in droves (thanks to HSUS’s legal language limiting how many dogs they can own). And who would have to care for these animals? Local humane organization that are already crowded and cash-strapped. The same groups that HSUS sends its financial table scraps—if anything.

Even animal rights campaigner Bob Baker—a former HSUS investigator—threw his old employer under the bus by signing on to the Missouri compromise.

In Oregon, Courtney originally introduced a bill requiring every egg farmer in the state to switch to “cage-free” production. HSUS supported the proposal. But once he had a more complete grasp of the issue, Courtney amended his bill to favor “enriched” cages instead. (As we’ve noted, enriched cages have several welfare advantages over cage-free systems.)

The Oregon Humane Society has joined Courtney in the new proposal, while HSUS stubbornly demands an all-or-nothing approach with its own ballot initiative (a cookie-cutter copy of the WA initiative, just launched this week).

Courtney and the Oregon Humane Society are billing their proposal as an “Oregon Solution.” Missouri stakeholders painted the Prop B compromise as a local solution to a local issue. (Governor Jay Nixon is calling his approach “a Missouri solution.”)

The implication is clear: State-level groups don’t want to be left holding the bag once HSUS’s political activism does its damage. They know what more and more Americans are learning: that there’s little advantage in tagging along with HSUS when it tries to hamstring farmers.

As farmers of all kinds find their voice, that’s a smart position to take. As former Speaker of the House Tip O’Neill famously noted, “All politics is local.” And HSUS’s only real local constituency is in Washington, DC—on K Street.