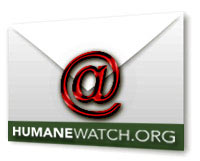 If you’re not a New Yorker or a frequent visitor to this blog, you may be unaware that we ran a full-page ad in yesterday’s New York Times, blowing the lid off of a scandal involving convicted dog-fighting kingpin Michael Vick, a $50,000 check from the Philadelphia Eagles, and Humane Society of the United States CEO Wayne Pacelle.

In short, if you’re wondering why Pacelle would suddenly become an apologist for Vick’s future pet-ownership plans, follow the money.

HSUS’s willingness to trade its principles for money is disturbing news, and hundreds of you were outraged enough to e-mail us your thoughts. Many of your e-mails contained language (directed at Pacelle and Vick) that’s not exactly “family-friendly,” but here’s a sampling of some of your more polite reactions:

Michael Vick has no business owning a pet no matter how much money he or associates donate to the Humane Society. He is responsible for the very painful death of at least 8 dogs purely for entertainment and gambling purposes. I am appalled that Wayne Pacelle as CEO of the Humane Society would sell our values for a donation. Has he forgotten what pain Michael Vick has perpetrated on these animals?

My husband and I used to give to PETA, but then we found out how many animals they were killing at their so-called “shelter” in Virginia. Then we switched to HSUS, but I’ve been repeatedly disappointed with that group too. This news about endorsing Michael Vick is the last straw. From now on, I think we’re going to get to know a few local humane societies and support them. I hope I can count on them to be better human beings than Mr. Pacelle.

I rarely look at the sports section but just saw this ad – took my breath away. I guess it’s true that $$$ talks for some. I’m furious!

I just phoned HSUS to cancel my monthly credit card pledge. Thanks for giving the number in your ad. Wayne Pacelle now has a smarmy-sounding message when you call in, complaining about how he’s being attacked. What an arrogant you-know-what. If HSUS is ever going to survive this, Pacelle should look for a new job. I know he’ll never see another penny from me.

My father graduated from OSU Vet School as number one in his class in a class of 44. He is turning over in his grave to see how anyone would treat an animal as Vick did. He raised all types of animals and had entered dogs into the top national competitions. He believed in bettering the breeds of all animals – not persecuting them. My daughter is also a Veterinarian and a large part of her patients are dogs. She is extremely disturbed about Vick's treatment of animals. I do not believe Vick deserves to be near any type of animal in the near future and I am extremely disappointed in the Humane Society.

I read in today's New York Times how the Philadelphia Eagles bought off HSUS by making a $50,000 contribution so that Michael Vick (the consummate piece of garbage) can own dogs again. My wife and I have contributed a considerable amount of money to HSUS over the years, but that is at an end. We will also inform every animal advocate we know to never contribute another dime.

Thanks for saving me from making a huge mistake. I wrote HSUS a check just yesterday for a big donation (big for my budget, anyway). Last night I tore it up. My charitable donation is going to the American Red Cross instead.

Keep those comments coming, either via e-mail, on our Facebook wall, or (better yet) on HSUS's Facebook wall. Let 'em hear from you.