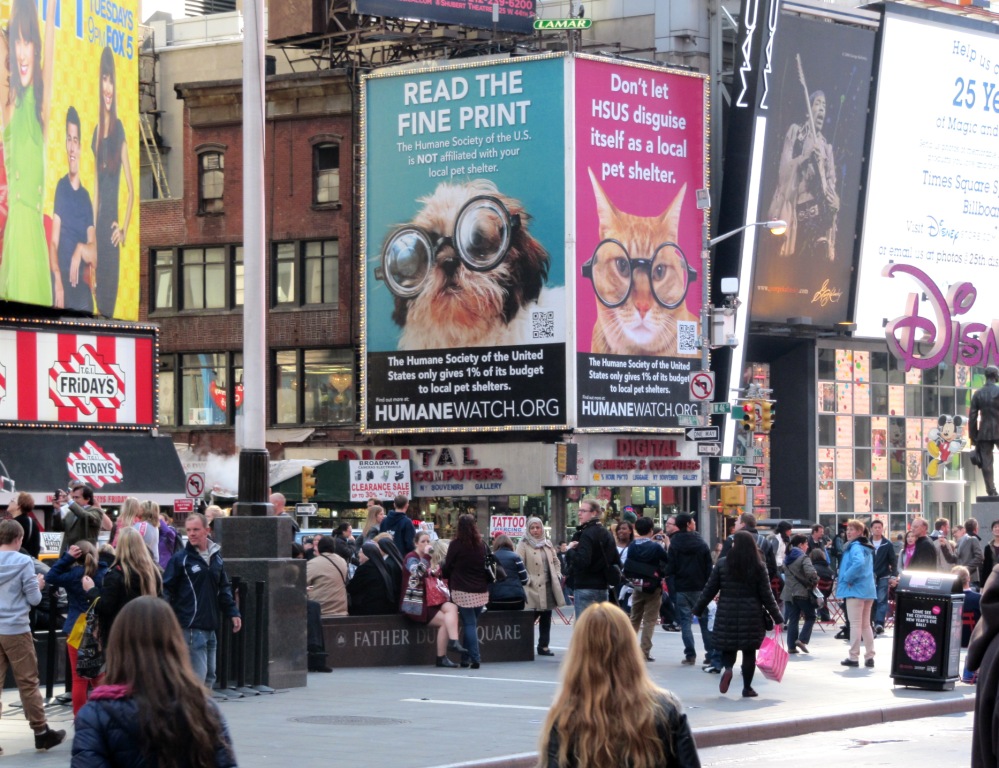 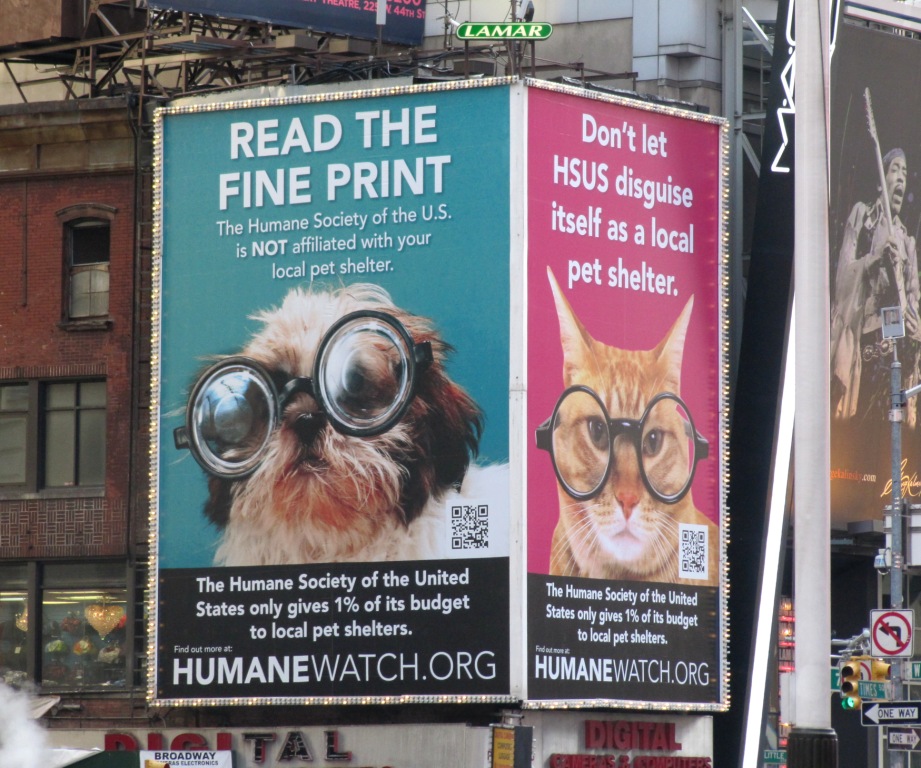 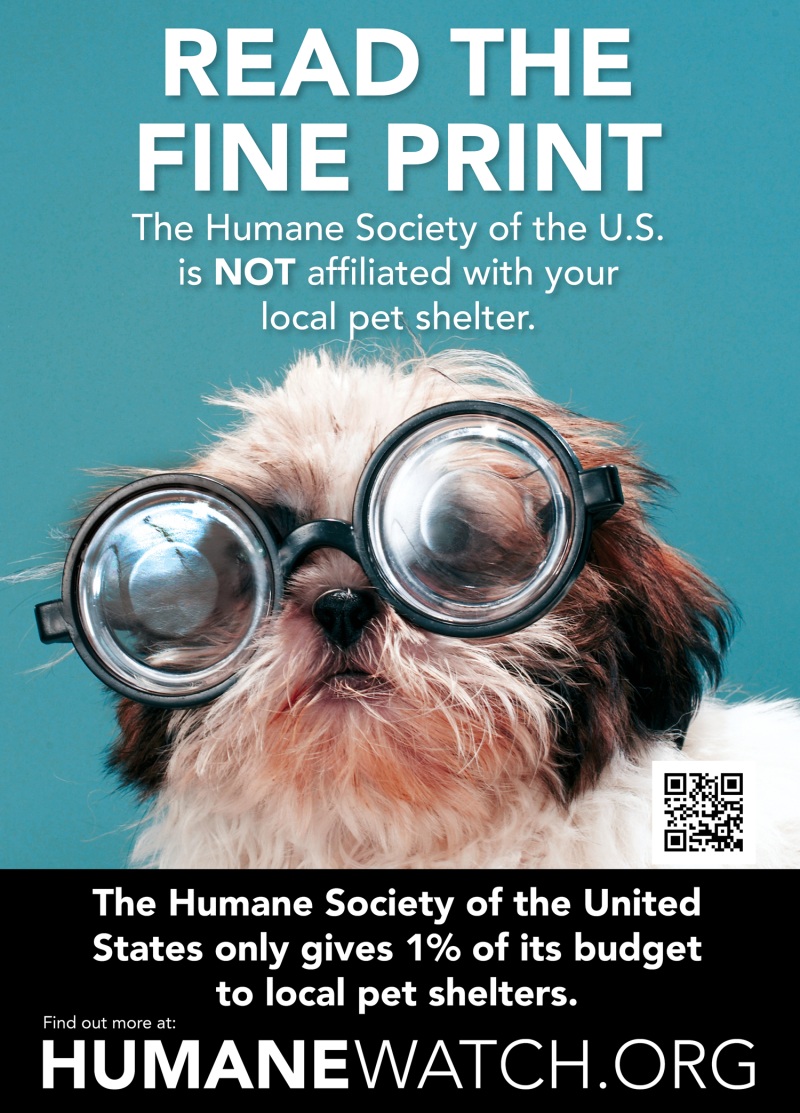 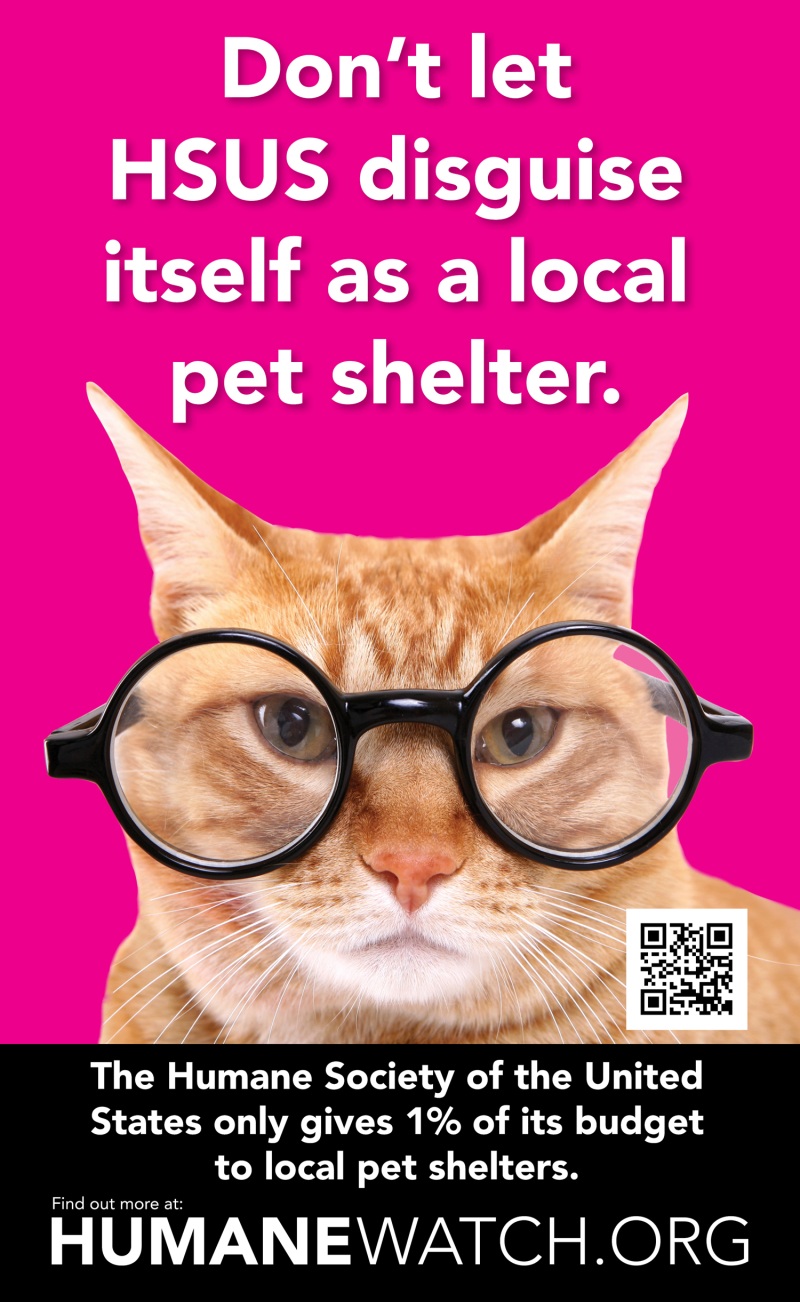 Washington, DC – Today HumaneWatch.org, a project of the nonprofit Center for Consumer Freedom, unveiled two new Times Square billboards on the corner of West 46th Street and 7th Ave. The billboards highlight the Humane Society of the United States’ (HSUS) duplicitous fundraising practices—as the vast majority of its fundraising commercials feature dogs and cats, yet only one percent of the money HSUS raises from the public goes to local, hands-on pet shelters.

The billboards feature a dog and cat reminding Americans to “read the fine print” and not let “HSUS disguise itself as a local pet shelter.” According to recent public polling performed by ORC International, 71 percent of Americans mistakenly believe that the Humane Society of the United States is a pet shelter umbrella group and 68 percent wrongly believe that HSUS gives most of its money to local pet shelters.

“HSUS uses emotionally manipulative ads to raise money on the backs of abandoned and abused dogs and cats, yet it gives just one penny of each dollar it raises to local pet shelters,” said CCF Senior Research Analyst J. Justin Wilson. “Our Times Square billboards are educating Americans about HSUS to ensure their donations go to support the cause they intended. If they want their dollars to aid cats and dogs in their community they should give directly to local pet shelters instead of inadvertently bankrolling HSUS’s aggressive animal rights agenda.”

HSUS’s advertisements routinely employ the images of downtrodden dogs and cats to tug at the heart strings and wallets of America’s pet lovers. However, according to the animal rights group’s own tax documents it shared a meager 1 percent of its $126 million budget with sheltering organizations nationwide in 2010. In the same year, HSUS spent an astounding $47 million in fundraising-related costs (37 percent of its total budget) and parked $32 million in hedge funds.

For more information, visit www.ConsumerFreedom.com. To schedule an interview, contact Allison Miller at 202-463-7112.

The Center for Consumer Freedom is a nonprofit coalition supported by restaurants, food companies, and consumers, working together to promote personal responsibility and protect consumer choices.