Pet Shelters Deserve More than Just a Billboard. (How About Five?) - HumaneWatch

We’re proud to announce that a whole fleet of new HumaneWatch billboards is dominating part of Times Square beginning today, right in the heart of New York City.

Our five-billboard mosaic at the corner of Seventh Avenue and 48th Street will reach literally millions of people in the coming two weeks. And that can only be good news for animals. 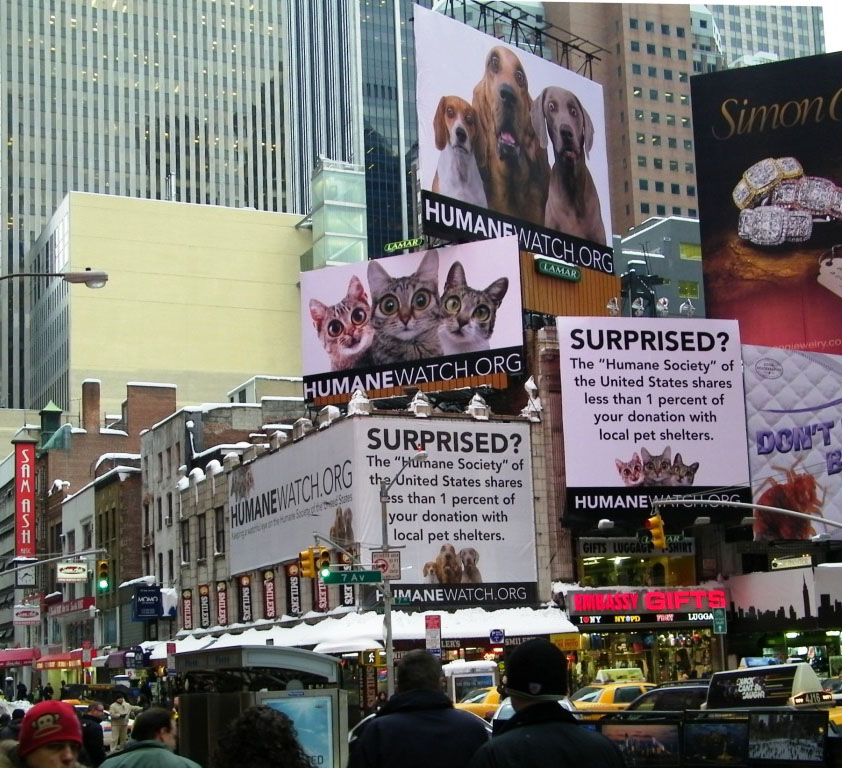 Our eye-catching outdoor advertising will teach New Yorkers (and countless tourists) that the Humane Society of the United States shares less than 1 percent of its income with hands-on pet shelters. It's those cash-strapped institutions, ironically, that do the heavy lifting of rescuing dogs and cats like those in HSUS's television ads.

HumaneWatch is still less than a year old, but it has become a hugely effective communications campaign—largely because of the tremendous word-of-mouth response of readers like you. So today we’re asking you to double-down and spread the word some more.

The Humane Society of the United States is the only one of the thousands of U.S. humane societies that doesn’t operate a single shelter for dogs and cats. It’s an animal rights group which is wholly unaffiliated with real “humane societies” and barely gives pet shelters any money. But most Americans still think HSUS is a pet-shelter umbrella group whose money goes mostly to community-based dog and cat shelters.

The sooner every American understands what HSUS really is (and what it isn’t), the sooner the tens of millions of dollars HSUS collects annually can be redirected to the struggling shelters that most need that funding.

Of course, the Humane Society of the United States could also choose to do the right thing on its own. We pledged more than eight months ago that we would shut the entire HumaneWatch project down if HSUS president Wayne Pacelle would promise to share just 50 percent of his budget with hands-on pet shelters. We’re still eager to follow through on that pledge, but all we’ve heard from Pacelle is the sound of crickets.

Honest change at HSUS that benefits pet shelters and real humane societies would be a welcome development. But until the organization takes its donors seriously and begins to behave in a way that reflects their intentions, we’re not going away. And more high-profile ads will be coming.

HumaneWatch is not a fundraising organization. (Your local pet shelter needs your money more than we do.) But if you want to contribute toward the installation of more billboards like these, here's a secure page where you can donate.